Written by Julia Echeverría on 04 April 2013. Posted in CCSBlog. 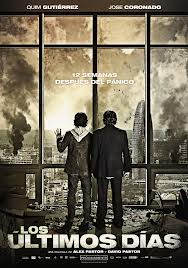 Los últimos días (The Last Days in English) follows the trail of a long list of post-9/11 disaster movies that have lately flooded both theater and TV screens with elaborate imageries of collapse and impending doom –and which apparently continue to sprout even after the end-of-the-world date of December 2012 that many of them used as a backdrop for their plots. This film may seem in that sense a continuation of something we’ve already seen dozens of times. The film constantly echoes previous apocalyptic movies like Cloverfield (2008), I am Legend (2007) or Blindness (2006), and it reenacts every convention of the genre: the use of long shots of empty streets, gloomy malls and churches; supermarket lootings; the gradual disintegration of social and political institutions; the de-signification of things like money; the delivery of rather camp dialogues and performances (especially by Quim Gutiérrez); and a hero’s quest for his girlfriend that sometimes looks more like an episodic action videogame. The apparent single novelty this time is that the locus of the action is not New York or London but Barcelona, and that, as a result, many of these conventions have been translated (sometimes rather clumsily) into the Spanish context. At one point, for instance, the movie demystifies holy hosts, which become plain food for a hungry José Coronado, a scene that made spectators laugh at the movie theater for the (unintentional?) parody contained in the gesture. However, despite all these conventionalities and natural feeling of estrangement on the spectator (after all, we’re used to seeing Will Smith wandering along New York’s empty streets, but Barcelona? José Coronado? That’s too close, too mundane for us to believe), Los últimos días elaborates in any case a subtle metaphor on the current Spanish context by means of its compelling premise and a polished photography*.

The film, which is Catalan directors Àlex and David Pastor’s second movie after Carriers (2009), centers again on the spread of a virus of unknown origin, although in this case the virus bears a much more psychological undertone than the biologically infectious germ of their first movie. The opening describes how the so-called epidemic of ‘Pánico,’ a sickness similar in its symptoms to an extreme case of agoraphobia, has broken out in the US, affecting gradually the worldwide population. People experience a deep anxiety that leads to death whenever they try to get out of buildings, a premise that inevitably brings to mind other siege movies, especially Buñuel’s allegory El ángel exterminador (1962). The relevance of this movie lies precisely in its presumed metaphorical intent. Coronado’s pessimistic character, with his drilling “this is the end; there’s no way out” attitude –together with veiled references to how politicians are hiding the truth or to personnel downsizings in companies– point to a very familiar context. The inability to get out of buildings becomes a displaced hyperbolic representation of the feelings of entrapment that the financial crisis has instilled into a whole generation of Spaniards, leading to an all-encompassing pessimism and despair towards a dark future. If the movie is worth watching in spite of its many unbelievable sequences is thanks to this metaphoric flair and to the use of some gripping shots. However, a natural question that one may ask him/herself afterwards is, is this Hollywood-like film language necessary for expressing these very contextually specific ideas or is it a mere way of attracting spectators? After all, are these Spanish blockbusters (of the kind of last year's Lo Imposible) adding something new to "our" filmic panorama (whatever that may mean)?

*Like many other epidemic movies, the first part of the film is particularly remarkable in keeping the tension and suspense (even if the trailer spoils its basic idea) thanks to a narration full of flashbacks of a pre-apocalyptic Barcelona that explain little by little how the downfall started. An especially visually beautiful moment is a shot of a starry night (after the blackout of the city) followed by a flashback shot of the protagonist's computer screensaver featuring galaxies –an effective and straightforward way of illustrating the process of de-digitalization and return to a pre-civilized world that these films commonly portray.

#1 Celestino Deleyto 2013-04-05 10:10
What I would like to know is why Coronado's character can't understand Catalan: when the two protagonists come across a group of people coming from the neighbourhood of the hospital where his father is staying, they speak to him in Catalan and the younger man has to translate for him. If his father is "permanently" in a hospital in Barcelona, are we not to assume that he lives in the city, even that he has lived there all his life? Why can't he speak Catalan? Is it just a cheap plot device to increase the dramatic impact of the news abut his father? And while we are at it, is the film's basic premise, that people die when they go outside, at all readable in terms of the current Catalan situation? Just wondering.
#2 Julia Echeverría 2013-04-06 13:01
That's one of the many unbelievable things of the movie. Maybe the justification is that Coronado's character is not from Cataluña (he says he's constantly moving from one city to the other firing people), but I agree it must be some kind of plot device (maybe also to avoid using subtitles) because it doesn't make much sense. It was weird because it gave the impression of Catalans being "foreigners" with an incomprehensibl e language!

I hadn't thought of that premise in the context of Catalan nationalism, but it does make sense.
Refresh comments list
RSS feed for comments to this post