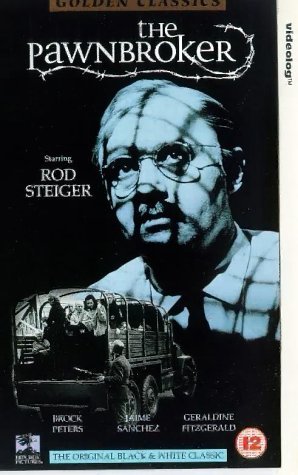 The Pawnbroker (1965) is not a film likely to be shown on commercial cinemas today, but the ongoing public interest in the Holocaust – its many memories and memorials as well as its various metaphorical uses – makes it most pertinent to rescue it from some film archive. Directed by Sidney Lumet, and based on an eponymous novel written by Edward Lewis Wallant in 1961, The Pawnbroker links the Holocaust to the experience of urban black poverty in Harlem in the early sixties. This parallelism, together with a thinly veiled Christian analogy, serves to postulate a universalistic interpretation of the Holocaust as just another instance of human suffering while it subdues the Jewish specificity of this historical event. The parallel between the brutal life in contemporary Harlem and that in a Nazi concentration camp had already been drawn in a documentary, Strange Victory (1948), directed by the American leftist radical Leo Hurwitz, but it was new in Hollywood cinema. The film also introduces another departure from previous Hollywood narratives of the Holocaust by focusing on the traumatized psyche of a concentration camp survivor rather than on the legal/political dimension of the historical event. In so doing, it inaugurates a trend that would be developed by other filmmakers in the following decades. The film certainly captures a newborn visibility of the Holocaust that resulted, in part, from the widely publicized and debated trial of former Nazi Adolf Eichmann in Jerusalem in 1961. But in many ways The Pawnbroker is also exemplary of the aesthetic changes that Hollywood cinema was undergoing to adapt to technological innovations and new cultural changes. The use of slow motion, zooms, relentless metaphoric crosscutting, graphic matches, flashbacks, black and white cinematography, expressive composition and mise-en-scène are just some of the mechanisms used to depart from classical Hollywood cinema, to make films more self-reflexive and, ultimately, to make the viewer think. The influence of the French New Wave was particularly central to the development of a new sensibility in Hollywood filmmaking and of a new audience in the US. In the film this influence can be seen, for

example, in the use of subjective flashbacks that render visually the protagonist’s involuntary memory into his troubled mind. Unlike the traditional use of transitions (dissolves or voice-over) to indicate visually changes from present to past realities, the film uses direct cutting in flashbacks, a technique that was used for the first time in the unforgettable Hiroshima, Mon Amour (Alain Resnais, 1959). No doubt, The Pawnbroker has passed the test of time, in the sense that its stylistic experimentation as well as Rod Steiger’s extraordinary performance as the pawnbroker and Holocaust survivor have lost none of their power to convey this gripping story of human suffering. This is a film that should be taken into consideration when studying both the cinematic representations of the Holocaust and the Hollywood cinema of the Sixties.