Written by Celestino Deleyto on 19 May 2013. Posted in CCSBlog. 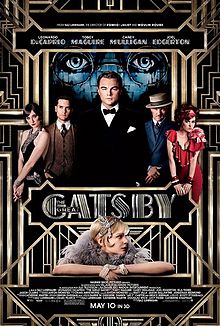 Luhrmann’s Moulin Rouge (2001) was equally loved for its glamour and relentless exuberance and despised for its superficiality and vacuity. Its use of parody, pastiche, camp and all the modes and genres usually associated with the postmodern exposed, for the film’s detractors, its glaring limitations as serious art. 12 years later, The Great Gatsby, appears to start on a similar track: digitally enhanced fantastic recreations of Gatsby’s New York alternate with endless parties familiar to the spectators from all of the Australian director’s previous features, particularly the Capulets’ celebration in Romeo + Juliet (1996), another, for some, pointless revisiting of Shakespeare’s early tragedy. Particularly potent in the world created by Luhrmann is the Valley of Ashes, the sordid working-class section of Long Island that the characters have to cross in their fancy automobiles to go from the mansions where they live to Manhattan.  Yet, in this film more than in the earlier ones, the filmmaker’s immediately recognizable version of camp illustrates the more general point that postmodern strategies are not necessarily vapid fun and games.

The Great Gatsby provides an excellent opportunity: a story of surface glamour and darker undercurrents that puts forward a particularly powerful version of the American Dream. By further associating it visually, narratively and in terms of performance with Citizen Kane (1941), Luhrmann may persuade many of his spectators that his postmodern camp is a particularly apt channel to tell what for some is “the great American story,” even though, no doubt, purists will whine at the liberties he has taken. What a shame that, like so many other “great directors” nowadays, he didn’t have a good friend next to him to explain that a film is not necessarily better the longer it lasts.

#1 Beatriz Oria 2013-06-04 00:00
I did perceive Mouline Rouge as a vacuous (albeit beautiful) experience. The Great Gatsby is equally breathtaking in visual terms (even more so, thanks to the advances in digital technology), but this time I have not felt it was a pointless aesthetic “exercise”. I believe Luhrmann’s obsession with glossy façades works in his favour this time, as its shiny manufacture dovetails nicely with a story which is intrinsically “all about the surface”.
Refresh comments list
RSS feed for comments to this post