COMIC RELIEF IN TIMES OF CRISIS 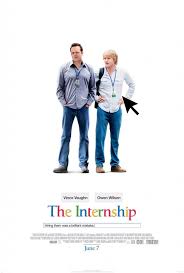 The Internship's (2013) main asset lies in the chemistry between its protagonist couple: Vince Vaughn and Owen Wilson, who is well-known for his buddy comedies. The most successful of them is Wedding Crashers, featuring Vaughn as well, which propelled the genre of bromance to new heights in 2005, helping it become the most thriving turn of the "New American Comedy". The Internship reprises this already-tested formula, but this movie introduces a new element in the equation: in The Internship friendship and romance - usually the genre's main concerns - play second fiddle to a more pressing social reality: the present economic crisis takes centre stage in a film which deals with a pair of friends in their mid-forties whose low-tech jobs as sales representatives become obsolete in the digital era.

The Internship is not a very interesting film per se: although the comic rapport between its two protagonists manages to elicit some laughs, its screenplay is not particularly inspired or original. However, it is significant as part of a larger corpus of films which are being produced by Hollywood slowly but steadily during the last decade and which are painting an increasingly accurate picture of the dire economic circumstances of the 2010s world economy. This preoccupation is not only evident in the great number of documentaries dealing with the crisis (and the circumstances that led to it, such as economic scandals) being made nowadays (Inside Job, Capitalism: a Love Story, We All Fall Down: The American Mortgage Crisis, The Flaw). It is also evident in economic thrillers and dramas such as Margin Call, Up in the Air, The Company Men, Wall Street 2: Money Never Sleeps, Arbitrage orToo Big to Fail. Even science fiction is starting to tackle the problem in a more tangential fashion (In Time).

In a less explicit way, comedy is also showing its concern with this topic in films like Wanderlust, Tower Heist, Horrible Bosses, Larry Crown or The Internship. These films tend to offer a much more hopeful perspective on the crisis. In comedy, the happy ending is mandatory. Therefore, this genre is able to engage with a somewhat thorny subject in a safe manner, helping spectators cope with the situation while allowing them to exorcise their fears about the unstable economic panorama by the end of these films thanks to a happy resolution. In the process, these movies often invoke the myth of the American Dream, redressing it for the New Millennium under new adverse circumstances. Such is the case of The Internship: when the protagonist couple are made redundant, they manage to get an internship in Google, which is presented as the Mecca of professional bliss (the unashamed Google publicity throughout the whole film seems to indicate that Hollywood is starting to explore new ways to overcome its own economic crisis). The film exploits the conventions of the "fish out of water" trope: the characters' lack of technological expertise creates all kinds of comic situations and misunderstandings. However, as was to be expected, in the end, all obstacles are overcome thanks to their perseverance. Thus, the film offers a somewhat "fantastical" ending which tries to infuse a bit of hope in the grim professional panorama many people find themselves in while offering some "tips" to survive the turbulent employment market: in an increasingly competitive professional context, flexibility is key: the individual must be willing to change their career orientation if necessary. Middle-age does not need to be a drawback, as experience is an asset, and so are creativity and imagination: basically anything that sets you apart from the rest. In the end, the final message is clear: anything is possible if your heart is in the right place. Comedy may not have the answers to the financial mess we find ourselves in, but it surely makes things look a bit brighter: the American Dreams still lies there within our reach at the end of the tunnel, even in the face of economic adversity.