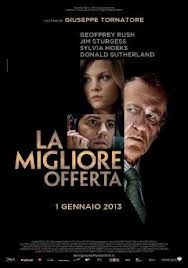 Giuseppe Tornatore’s La migliore offerta (The Best Offer) would seem to be following the trail of The King’s Speech in evoking a sense of old Europe for the international audience. Geoffrey Rush plays a lonely art auctioneer who collects female portraits but has never been in a relationship with a woman, in fact suffers from an aversion to touching people. Things change when he falls in love with an agoraphobic young heiress (Sylvia Hoeks) who wants to sell a collection. The film tells the, predictable, story of an affectively incompetent man saved by a lady’s mystery and how this, also predictably, later turns against him as the film switches from romantic melodrama to thriller and nothing is what it seemed to be. But the film does not manage to get off the ground, mainly under the weight of its self-importance. Everything feels affected, from its overblown style to the story’s Dickensian echoes or Rush’s obviously metaphorical name, Virgil Oldman. However, the film is interesting in the way it strives to create an ambiguous, imaginary space associated with Europe, artistic taste and worldly-wise cynicism. A space where English works as lingua franca for an international cast of Australian, British or Dutch actors, and where you can even see push/pull signs in English on café doors. Tornatore has said that the story is supposed to take place in Mitteleuropa, somewhere in the former Austro-Hungarian Empire, but it did not work for me. I kept trying to find out what the actual locations were and in some scenes paid more attention to the cars’ licence-plates than to the characters’ goings-on. I suppose I thought that seeing through the fantasy would make the story more relevant to me, and that Trieste or Vienna, some of the real locations, were more real than Mitteleuropa.

#1 Celestino Deleyto 2013-08-25 18:07
I generally find it very annoying when film stories are set in non-existent places, or metaphorical places, unless it's science fiction. This "disrespect" for real places spoils films for me, too.
Refresh comments list
RSS feed for comments to this post