LOST AND FOUND IN TRANSLATION 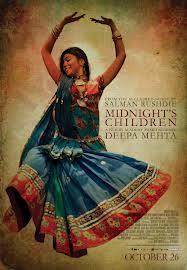 A film adaptation of Salman Rushdie’s outstanding novel Midnight's Children by the director of the powerfully delicate trilogy Fire (1996), Earth (1998) and Water (2005), Deepa Mehta, was very promising. However, great expectations of the kind are often difficult to fulfil. It is true that a filmic adaptation of an extremely complex book is bound to disappoint readers who become reluctant spectators; but even unprejudiced audiences eager to see Mehta’s own filmic interpretation of the novel may find that the movie, as an independent cultural and artistic product, does not work properly. It has probably been Mehta’s extreme respect for the original source and her accurate portrayal of the novel’s passages on screen that, I believe, has devoid the movie from the ironic, irreverent and multifarious spirit of the narration as well as from her own genuine spirit as a filmmaker.

Although the first scenes manage to recreate the mysterious atmosphere of magic realism that permeates the book, that “magic” gradually disappears in subsequent sequences as if it had been “lost in translation” from the written word to the visual images. Characters also lose their strength and, curiously enough, what remains is the realism and restraint of a “heritage film” in the account of the recent history of India. In this sense, Midnight’s Children may work as a transnational film that brings to light moments of history told from perspectives of those inhabiting hybrid spaces, unveiling personal stories to spectators with different cultural backgrounds worldwide.

Perhaps, one of the aspects that better describes the feeling of fracture and exile that impregnates the construction of India’s identity after independence, as well as the “translated identity” of novelist and filmmaker, is the production of the film itself. Even though the movie sets out to narrate the history of the Indian subcontinent after independence, its partition and wars in the second part of the 20th century, with characters travelling across the politically changing territories of India, Pakistan and Bangladesh, none of these countries provided the setting for the movie. Controversial figures as both writer and filmmaker are, Rushdie and Mehta had to shoot the main sequences of the “exiled movie” in Sri Lanka in order to avoid confrontation with either Muslim or Hindu fundamentalists. This fact, together with the excellent choice of the soundtrack, imbue the film with the meaning that the restrained scenes fail to transmit: the sense of exile, fragmentation and excess of the multiple Indian identities which go beyond the very boundaries of the Indian subcontinent. As Rushdie himself has pointed out, although something always gets lost in translation, something can also be gained.

#1 Celestino Deleyto 2013-08-25 18:04
Yes, it's a very academic film, so academic that Saleem Sinai is played by Homi Bhabha's son. The actors are OK, though, but the reverence to the original ends up spoiling the adaptation. I doubt that spectators who haven't read the novel can follow the plot.
Refresh comments list
RSS feed for comments to this post