Written by Rosa Urtiaga Echevarría on 20 August 2013. Posted in CCSBlog. 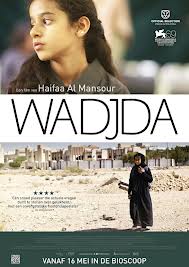 “A woman’s voice reveals her nakedness. What if a man had heard you?” This is one of the repetitions referring to Arab women’s constrains in the Saudi film Wadjda. It is the first feature film entirely shot in Saudi Arabia, and the first with a complete Saudi cast. Yet, it cannot be seen in its country of origin, where there are not movie theaters. Its director, Haifaa Al-Mansour, is the first Saudi female filmmaker. Her movie has received critical acclaim but some reviews describe this filmic protest as “modest.”

Structurally, it is a simple tale told from the point of view of Wadjda (Waad Mohammed), a 10-year-old lively girl who wants a bicycle. Her mother (Reem Abdullah) refuses to buy her one: girls are not allowed to ride bikes in Saudi Arabia for fear that they would lose their virginity. A less hypocritical reason is keeping women under control by preventing their mobility. In this country there is no public transportation and women are not allowed to drive or walk alone unless they are under the guardianship of male relatives. Wadjda cannot see the logic in this, so she decides to raise the money for a bicycle herself. Through her dreamy eyes we perceive the bicycle as freedom, something that Saudi females lack. While the present-day world pursues borderless mobility many women cannot move freely in their own neighborhood.

Wadjda’s bicycle offers the hope that gender borders will increasingly fade in the future, as suggested by the positive reception on Twitter by Saudi women.The three main actresses describe the different paths women’s lives can take. Wadjda represents the brave girl that ignores Arab women’s constrains.  Like the director of the film, she works within the system to change it. Hussa (Ahd), the hypocrite School Principal, who was herself a free spirit as a Little girl, makes up for her own frustrations by rigidly imposing Wahabi codes of behavior. Wadjda’s mother, as other married women in Saudi, is submissive to her husband (in Saudi divorced women lose their children custody). She also depends on a male driver to go to work.  When her husband takes a second wife she understands that her dedication to her husband and submission to social control is worthless, and she buys Wadjda the desired bicycle. The metaphor of the bicycle represents the control of women’s mobility and sexuality, and, generally speaking, their lack of freedom.

The motion of the movie as a cultural product beyond the borders of its country of origin contrasts with the lack of mobility that Wadja and all Saudi women’s experience. When making her film, the director realized that she did not know the streets of Saudi Arabia particularly well, which was a real handicap, so she had to rely on location scouts. Even if the film had official permits, when shooting in conservative areas, Al-Mansour had to be in a van and direct the actors through the phone or walkie-talkies because women cannot to walk around the streets alone, or mix with men. Its female director had to face criticism from her society and her extended family, both to achieve her dream of being a director, and to shoot the film.  Can we actually say this is a “modest” attempt to show women’s roles in Arabian Society?