The Longest Take: Birdman (or the Unexpected Virtue of Ignorance)

Written by Celestino Deleyto on 11 January 2015. Posted in CCSBlog. 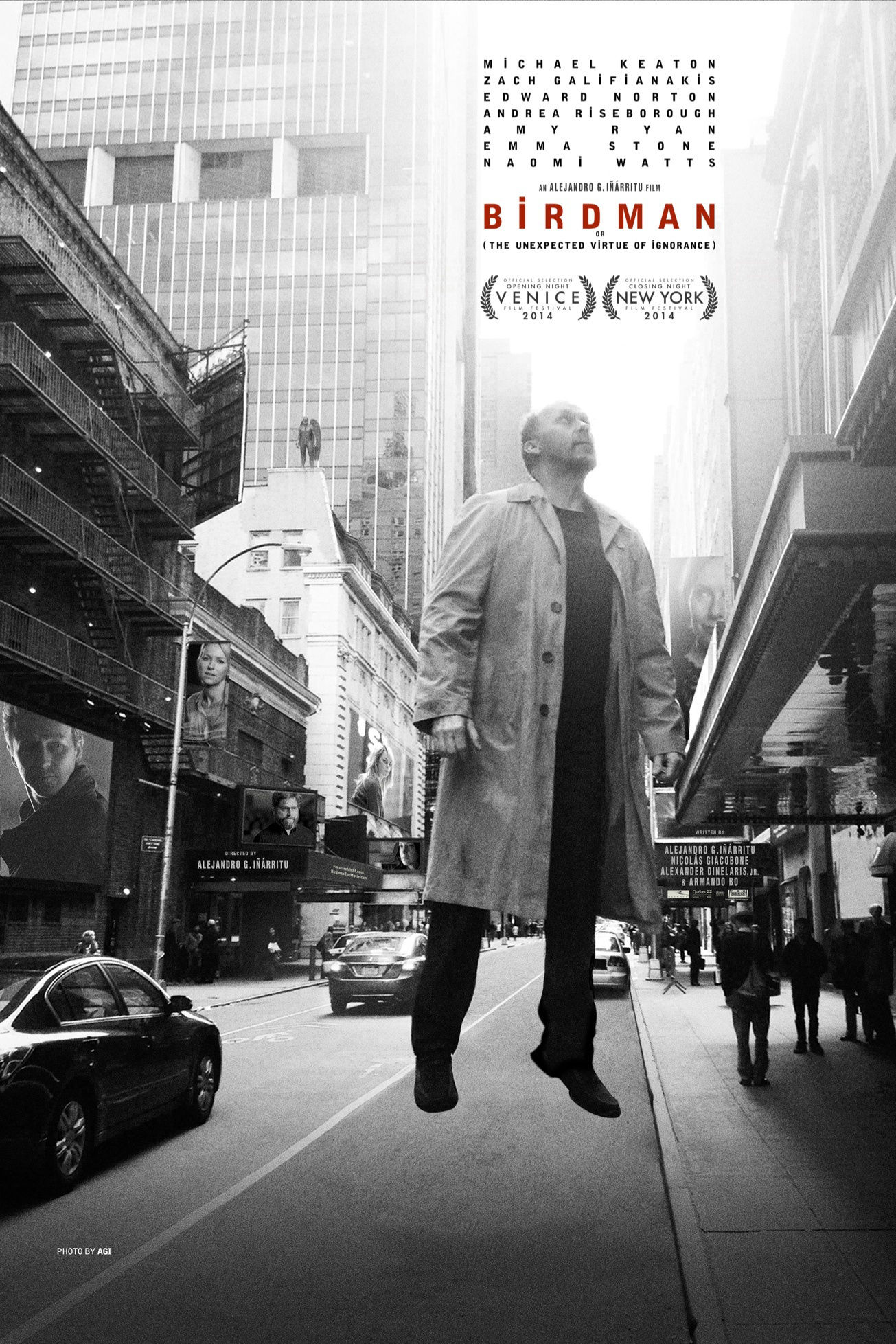 When films use an overarching stylistic conceit, as Birdman does with the illusion of a single take for most of the narrative, they tend to do so primarily for conceptual reasons. In this case, the uninterrupted take that occupies most of the film (cuts have been digitally disguised but that is beside the point) seems to suggest that there is no separation between the proliferating levels of reality present in it. There is the level of the actors putting on a theatrical production of an adaptation of a Raymond Carver story on Broadway; the story of the play itself, snatches of which we see throughout the movie; the voice that protagonist, washed-out Hollywood star Riggan Thomas (Michael Keaton) often hears, reproducing that of Birdman, the fictional character he had played in a series of Hollywood blockbusters twenty years ago; the “supernatural” reality in which Riggan can make things happen with the power of his mind--from opening doors and smashing things in his dressing room in fits of anger to flying above the Manhattan skyscrapers and wreaking havoc in the street with the aid of flying monsters in one of the best scenes of the movie; and even what we might call the “real world,” which includes frequent references to Hollywood stars like George Clooney, Meg Ryan and Ryan Gosling and, theoretically therefore, also the spectators that are watching the movie.

The fluid and constant camera movements eliminate the boundaries between all of these levels. Through this strategy the text would have us believe that all these leves are all part of a continuous and single reality, one that is much more multi-faceted and complex than we give ourselves credit for. The combination of this multiplicity of levels and the single take is part of an overall narrative strategy that also includes plot elements such as Mike (Edward Norton) wanting to have sex with his off-stage partner Lesley (Naomi Watts) as part of one of the dress rehearsals of the play to “make it more real,” and his breaking the fourth wall in the middle of another dress rehearsal to complain about the lack of authenticity of the proceedings. Iñárritu mixes this old metafictional game with his “Mexican” penchant for integrating the supernatural as part of a realistic plot, as he had already done in his previous movie Biutiful (2010). Now the topic of the presence of the supernatural in our every day’s lives returns more centrally to explore, I think, the nature of our relationship with the cinema in a new way. For me, this is the central theme of the movie: not “what we talk about when we talk about love” (the title of Riggan’s adaptation of Carver) but “what we see when we watch a film.”

The long-take conceit also has other effects. Most prominent among these is the erasure of temporal ellipses, turning the events of several days into a continuous two-hour story. From memory, most of these papered-over ellipses take place when the camera stops following one of the characters and starts moving “on its own,” to another part of the film space. In many of these cases we are also transported, simultaneously, to a different time, generally in the future. As in all of Iñárritu’s previous movies, time behaves in subjective ways and strict chronology is constantly betrayed. Another effect of the long take, associated with Iñárritu’s preference for short frame distances, is the camera's constant circling around characters, as they struggle with their passions and their artistic egos in their many heated conversations. This strategy brings us uncomfortably close to their feelings, anxieties and uncertainties and in a sense transfers responsibility for the creation of meaning to the actors, who all do very well, perhaps with the exception of Keaton, who, in spite of almost universal praise for his performance, didn’t seem to me particularly great at performing emotional crises. Instead, I was particularly impressed with Emma Stone as Riggan’s daughter Sam but also with Amy Ryan as his ex-wife Sylvia.

While the self-imposed discipline of the single take produces particularly exciting and funny moments, like the monster attack on Manhattan as Riggan walks to the St James’s theater, some consequences are not so exciting, like the “obligation” to follow characters time and again along the narrow backstage corridors of the theater for no reason but the need to stick to the strategy. On the other hand, Emmanuel Lubezki’s brilliant cinematography makes the most of the conceit and, in combination with Kevin Thompson’s production design, produces a very rich and textured filmic space, both inside and outside the theater, a filmic Manhattan which is not only the aggregate of many earlier filmic renderings of the Big Apple but also the product of an outsider’s sensibility. This is both an aesthetically enticing and extremely claustrophobic space, one that expressionistically adds to the construction of the central character. Incidentally, apart from the presence of the scriptwriters of Biutiful and of editor Stephen Mirrione, here sharing credits with Douglas Crise, the old Iñárritu team has completely disappeared: to the early departure of Guillermo Arriaga, we now have to add Rodrigo Prieto, Gustavo Santaolalla and Brigitte Broch. In fact, even Alejandro González Iñárritu has been replaced by, according to the official credits, by Alejandro G. Iñárritu.

After Riggan’s attempted suicide, in what might have been the end of the film, and a fade to black, Iñárritu finally breaks his self-imposed discipline and temporarily abandons the long take, giving us instead a sequence of shots before returning, for the final scene at the hospital, to another uninterrupted take. I felt a sense of relief and was grateful that the filmmaker had finally let us off the hook and was allowing us to enjoy some good old traditional cuts. Yet one cannot help admiring the technical feat and the marvellous ways in which it constructs complex meanings for the narrative.

In general, with the use of the long take, Iñárritu offers the spectators a visual and emotional rollercoaster that, as we may conjecture during the monster-attack scene, is not so different aesthetically or even ideologically from the Hollywood blockbusters that he appears to be deriding. In fact, knowing the Mexican director’s opinion of contemporary mainstream Hollywood products, it comes as a pleasant surprise that he is exceptionally fair and nuanced in his comic articulation of the dichotomy high art (the theater, his own films) / mass entertainment (Hollywood). After all, we do consistently enjoy Riggan’s birdman alter ego’s voice-over and the Hollywood-like DGI-effects extravaganza of the final part as much if not more than the po-faced, intellectual theatrical adaptation of Raymond Carver. Iñárritu succeeds at deploying his comic range without stopping being himself, his mixture of satire, slapstick and affectionate humor proving every bit as intense and passionate as his habitual earnestness. Most welcome is his apparent readiness to laugh at himself and the empty loftiness of which he has often been accused. In may ways, Riggan and Mike represent aspects of the director, as he has been seen by the critics.

As a side note, I couldn’t help being amused when I re-read Violet Lucca’s very damning review of Birdman in Sight and Sound after watching the movie. I can only conjecture imagined two possible scenarios: either the critic, having decided to hate the movie before watching it, decided to ape the type of empty arguments and bored clichés offered by the film itself through the openly ridiculed New York Times critic (Lindsay Duncan) against the play; or the reason that Iñárritu likes to show the supernatural in his stories is that he does indeed have powers of divination and, in this case, he knew in advance what the critics were going to say about his film and decided to incorporate their future opinions in his plot, a bit like Woody Allen used to do. Either way, as Riggan would say to ruthless Tabitha, what about the structure, Violet, what about the characters?