Written by Celestino Deleyto on 01 February 2015. Posted in CCSBlog. 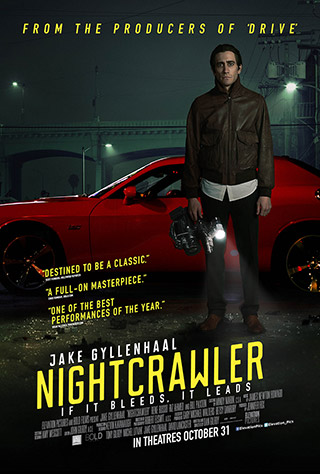 When he first visits the studio of a fictional TV station and sees a huge wall photograph of Los Angeles at night, Louis Bloom (Jake Gyllenhaal), the protagonist of Nightcrawler (Dan Gilroy, 2014), exclaims: “It looks so real!” The movie uses this as a metaphor of how news programs manipulate and reconstruct reality for the sake of ratings even as they proclaim the absolute veracity of their offerings. Nightcrawler presents itself as a denunciation of this: the decline in the crime rate in L.A. in recent years is not good news for the sensationalist media, whose ratings are shrinking accordingly. For this reason, the unscrupulous editor of a local news program, Nina (Rene Russo), treasures the recordings of graphic violence and blood that Louis brings her and directs him to crimes in affluent white neighborhoods, because, with the appropriate spin, that is the news that sells. For the sake of the ratings, she constructs, along with her reporters, a narrative of encroaching danger for the Angeleno rich that blatantly contradicts facts and may on occasion have tragic consequences.

The image of the obsessive man with a camera looking at the world through the viewfinder of his camera and trying to capture or discover in the photographic or cinematic image what cannot be apprehended by the naked eye evokes earlier films like Rear Window, Peeping Tom, Blow Up, and La mort en direct, among others, while Bloom’s sociopathic behavior echoes that of Robert de Niro’s Rupert Pupkin in Martin Scorsese’s  King of Comedy, probably a direct influence in Gyllenhaal’s creepy performance. The metafictional dimension, so dear to critics, turns the film onto itself and allows spectators to speculate on the mechanisms of representation utilized by the cinema. In offering a critique of contemporary TV’s exploitative practices à la Network, however, I wonder if the filmmakers are aware that they are the doing exactly the same thing they criticize with their rendering of the city of L.A.

Unlike, for instance, Michael Mann’s Collateral, with which it shares a certain fascination with Los Angeles at night, as seen from the freeways and surface roads that their protagonists tirelessly travel, Nightcrawler never really abandons the shimmering lights of the photograph that Louis admires on the wall of the TV station. Shot all around the city, the movie never abandons the cinematic shorthand that has come to stand for the real L.A. and shows no interest whatsoever in the real city, reserving its narrative sophistication for its protagonist’s warped everyman and surrounding him with the usual clichés, complete of course with the Latino criminals of the final part of the narrative. In failing to look beyond what sells as a representation of the postmetropolis, the movie is reproducing what it condemns in others.