Written by Pablo Gómez Muñoz on 14 February 2015. Posted in CCSBlog. 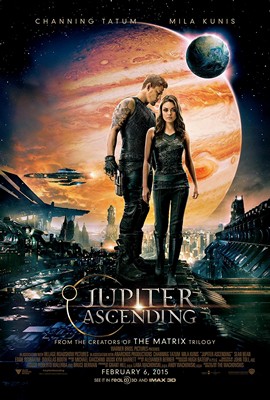 Most reviews of Jupiter Ascending (The Wachowskis, 2015) point out the dullness and even unbeareableness of its story and action sequences. Certainly, the chases and fight scenes are overly long and often pointless. Like Caine (Channing Tatum) predicts, he and Jupiter (Mila Kunis) do not leave Earth (nor any of the other planets) "without a fight." Another problem is perhaps that Jupiter Ascending tries to do too much. The movie's trailer ends with the phrase "Expand your universe." Keeping their promise, the Wachowskis include at least five different planets, a large array of characters, all sorts of creatures (aliens, lizards, androids, robots, winged human-dog hybrids, elephants, and whatnot), and constant references to other films, which may make some viewers feel like they are watching a giant, aimless pastiche. Yet, even though the references to other films may be disproportionate, they are coherent. To name a few, Jupiter Asceding recalls specific moments from Soylent Green, They Live, Men in Black, In Time, The Hunger Games, and Cloud Atlas, all of them critical dystopias or science fiction films with a critical edge.

Despite all the criticism that the film may deserve, one idea runs smoothly throughout the film: a critique of neoliberal accumulation. Echoing Thomas Piketty's Capital in the Twenty-First Century (2013), Jupiter Ascending points to a tendency towards the replication aristocratic structures in the contemporary world. In Jupiter Ascending, it all runs in the Abrasax royal family, whose members have come to rule the universe by means of inheriting the fortune that their ancestors amassed. Apart from this, they make sure to keep their position by trying to intensify capital accumulation patterns. The Abrasax company raises and "harvests," that is, kills humans in the planets that they own in order to use them as an ingredient for a cosmetic product that keeps people young. In contrast, those who can afford to buy the rejuvenating product may live forever. Like In Time did previously, Jupiter Asceding points to the consequences of accumulation by dispossession. Apart from the obvious inequalities that it generates, both films hint that such profit-generating mechanisms ultimately entail a dispossession of life. The worlds of these films are actually not so alien: as researchers look into ways to widen human lifespans, the global elites keep amassing capital that will eventually allow them to have access to the commodity of life. Jupiter Ascending ends on a more positive note, as Jupiter holds her ground, keeps her "rights" over Earth, presummably stops "harvesting," and the Abrasax headquarters literally crumble. While the film suggests that Jupiter makes the Abrasax neoliberal empire collapse, the last shot of the film captures Jupiter and Caine flying as the logo of a major US bank appears on the background, perfectly showing the ambivalence of many of Hollywood's seemingly critical films.