Written by Sergio Marqueta on 23 May 2015. Posted in CCSBlog. 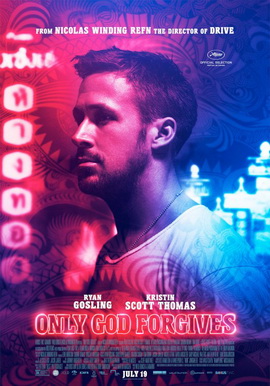 Definitely immersed in the new century, the filmic universe has begun to settle accounts with its past. In the fight about what belongs to this and what to its critique, hybrids like Drive (2011) and Only God Forgives (2013) stand out, both located at the periphery of a Hollywood system that imitates its core –and, in this case, both directed by a Danish filmmaker, with US American production for one and French-Danish for the other.

The transition from day to night defines the characteristics of a vast city, where despite its large population the feeling of being a nobody is most acute. An epitome of the Western drift where you can find yourself in a crowded parking lot and still fail to run into another person. The emptiness left by the day, exhausted by an always routine work, is replaced by the neon lights, a lone automobile and distant shots of a helicopter.

This juxtaposition of the empty and the full equates freedom with the logic of the prison. Characters do time where houses have no peepholes and there are only dreams of escape from sleepless bodies. Drive might look like one of those fables that point to strong emotions beating underneath immutable masks, where the scorpion waits to show its true nature, a self looking to break free.

This theory cannot be held if we note the mix of overlapped shots with no more connection than their mere accumulation. The protagonist does not hide a twisted psyche since moral sense has been replaced by one filmic code, which allows the film to show future and past actions out of sequence, emphasizing the indifference with which they are presented to the viewer; we already know them, anyway. The only uncertainty lies in discovering which film genre will be shown next. The empty performance, melancholy of reality –we can give any explanation to the hero’s(?) motivations (love, justice, feeling alive…) because he lacks content–, is flooded by a compilation of Hollywood-like sequences, serialized to exhaustion: the hardboiled mood, the second-rate mobsters, the tormented antihero, the driving, the heist, the platonic relationship, the true love, the slasher, the fugitive, the loser, the fall, the attempted massacre, the night highway…

If considered individually, perhaps as a prequel, it becomes a postmodern parody where the impossibility of a fulfilling life is replaced by an aesthetic possibility based on the appropriation of all available signifiers, as if by placing insatiable desire in them something not found anywhere else could be lived; hence those looks that lack genuine reverse shots and can only wait for the next one to replicate. Nevertheless, deploying Only God Forgives as superimposition instead of diptych, the parody turns literal description of America’s exhausted dreams and narratives. Despite trying to displace its coordinates in order to colonize foreign territories by utilizing the same technique, the Other’s resistance is obvious. The strategy will not even work by usingthe reverse classic trick, the depth of the mind vs. the surface of the road, disguised as something alien. The echoes of Black Rain, Blade Runner and, above all, of Wild at Heart cannot reach imaginaries such as I Saw the Devil –it is ironically insightful that spectators like us, trained by Hollywood films, hurry up to recognize lynchian motifs in the film when it is dedicated to Jodorowsky, reclaiming the South prominence in itself.

The vanguard of this invasion will come in the shape of a spectacular aestheticism that compels us to watch through the filter of the American flag, a representation of their (our) family. White, pure cocaine color cut with gold, the motherland that spoils her bravely sadistic son –Red– and condemns her younger child –Blue–, the blue of justice, which expected to be the alternative to the abuses of capitalist consumerism. The murderer of the father who, once deactivated, has no option but to be reproached for his origin, the emptiness of his destiny. This God who judges him, the West expanding its sickness, crashes against an order without justice –represented in brown and green hues– where the avenger of disorder can only let America die, finishing it off at most, assuming his own mutilation and renouncing to any offspring –as in Drive, when he runs away instead of taking care of the boy with a southern appearance. That which remains must not be confused with the noble savage myth because there is no dialogue or contact with him, only exhausted attempts to capture something that escapes.

The outcome takes the escape of the American rebel to its last consequences, making us doubt if he has finally reached his goals, if his impotence to face the challenges of the 21st century is confirmed, or even if one conclusion is inseparable from the other.