What are we laughing at? 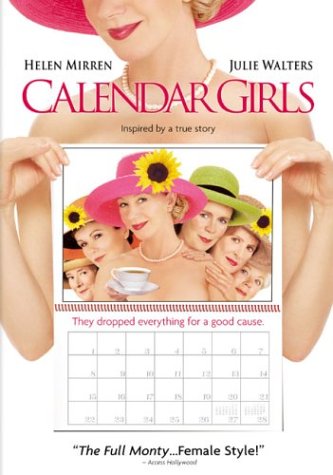 A modest little British comedy - the story of how and why a group of middle-aged women go ahead with the otherwise mad idea of posing nude for a calendar. As most reviewers of the film have indicated, Calendar Girls discreet success was most probably due to the film being so evidently a gendered copy of Cattaneos 1997, box-office hit, The Full Monty. Apart from memorable comic scenes like the Marks and Spencers winner at the cake contest and the tiny sequence that highlights so incisively the internationally-famed, stereotypical British phlegm, I think the key theme in the film is in no way comic since it deals head-on with the issue of age and (physical) desirability.  In this sense, very much like in the Full Monty (or even Billy Elliot), the characters identity is prompted by embarrassment or even a feeling of inadequacy.

From this perspective, it could also be argued that whereas The Full Monty uses comedy as an upholding and affirmation of mens inherent right to self-esteem and dignity whatever their physique, much of the humour in Calendar Girls relies on and/or emanates from the very traditional and conventional denigration of older women in society. In other words, while The Full Monty underlines the threat caused by changing industrial schemes and  womens 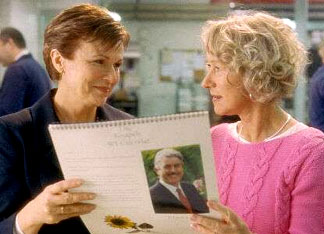 growing economic independence to the long-standing, hegemonic, male or patriarchal social set-up, identity in Calendar Girls springs from the protagonists generalised perception and recognition of societys down-right  rejection of older women. Viewed in this light, if the group of women in Calendar Girls carry on the way they do (all the extra care and preparations for the nude photography ordeal) it is because of their total assimilation of the present-day  and media-built  ideal of feminine beauty which thrives on encouraging women to view their bodies as intrinsically related to their sexual desirability. Bearing this in mind, it now appears that the defining comic force behind Calendar Girls is very patriarchal, broadly speaking for two reasons: first, because the film is based on a certain devaluation of older women (past the age of conceiving children, women have traditionally been considered as socially useless). In this sense, 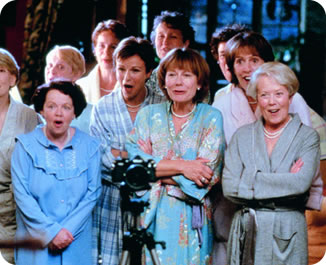 much of the comedy in the film centres on presenting older womens unsuccessful attempt to match up to externally imposed standards of beauty (based, especially in magazines and advertising discourses, on youth, glamour and desirability.) From this perspective, Helen Mirren (Chris Harper), Annie Clarke (Julia Walters), and the other group members, are presented as (comic) victims of this mostly unconscious association, mainly fuelled by the media, between bodily perfection and sexual attractiveness. Secondly, and on a less abstract and more down-to-earth  level, another substantial and most telling differentiation  stands out between  The Full Monty and Calendar Girls since it appears that the justification for repeating The Full Monty theme is that, in the womens case, striptease is legitimate only as a charitable cause. When  Julia Walters husband John (John Alderton) dies of leukaemia, Helen hits on a big idea: by mentally  linking the porno magazine she discovered in her son's bedroom and the girlie calendar exhibited in the local garage, she envisions a  fund-raising scheme for leukaemia research through or by means of an alternative calendar, exhibiting herself and her friends executing conventional feminine tasks  but in the nude! Comparison with  The Full Monty shows that, whereas in Peter 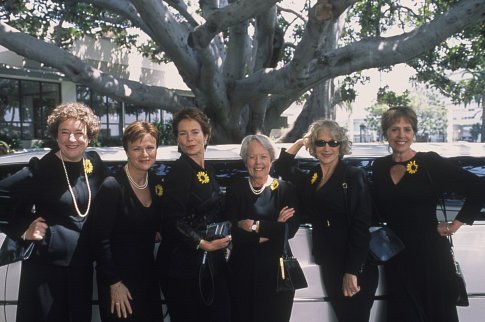 Cattaneos film, a one-night strip-show is presented as reasonable or validated on the basis of economic necessity (over and above physical defects), a womens endeavour in that same line is featured negatively (as illustrated when the group of women is faced with having to undress for a washing powder advert.) Such a daring move on the part of mature women is therefore conventionally accepted as cute or endearing only in terms of a charitable dedication to others. From there the fix, scrape or complication in the second half of the film. By means of the quarrel between Chris and Annie, the question the film, I would say, awkwardly poses, is: does philanthropy too easily and inadvertently lead to downright commercialism (apparently Chriss case) or is it a (distinct but apparently similarly selfish) healing activity that screens, shields, distracts oneself from the gnawing hurt of a missing being (Annies situation)? This quarrel between the two main characters suggests that striptease in the case of  especially older women  is justifiable only in the case of a selfless, philanthropic or altruistic cause, not for the materialistic or psychological promotion or benefit of oneself as a woman  The same old story, once again!