I think that we miss that touch so much, that we crash into each other, just so we can feel something

No one can deny that Crash (Paul Haggis, 2004) is a film that faithfully reflects a 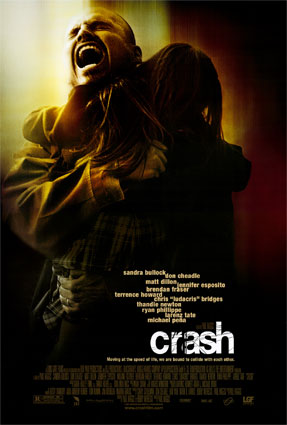 harsh reality: that of the inveterate racism and hostility in the contemporary lives of U.S. inhabitants. This time, Haggis does not place his racial drama in the rural South ─as has been the practice─, but chooses another suitable context for setting the different storylines that follow one another and finally merge in smooth, careful ways. The city of Los Angeles, as displayed in the film, appears as a hostile territory and the situations there reproduced as the ultimate consequences of an urban crisis, recalling incidents such as the race riots that took place in the area during the 1960s or the Rodney King beating in March 1991. In fact, Crash is nothing but the fictionalisation of a never-ending reality, as is the spread and consolidation of racial hatred and violence among people.

This urban drama explores the actual crash of a dozen of characters, who by chance ─or not─ collide into each other; out of these clashes, cultural differences come to the surface, in a battle that, in most of the cases, leads the characters lives to tragic denouements. Haggis creates a particular microcosm in which blacks, whites, Latinos, Asians and Middle East immigrants have to endure the consequences of racial prejudice, even when they are responsible for it. The director beautifully gathers and connects the characters experiences and reactions as they bump into each other, and the multiprotagonist technique sets itself up as the best way to do so. In this sense, Haggis more than accomplishes a task which, to tell the truth, has been in many occasions quite difficult to achieve. Although it is undeniable that some characters carry more narrative weight than others ─think of detective Graham Waters (Don Cheadle) or racist Officer Ryan (Matt Dillon)─, there is no apparent intention of highlighting or favouring, for whatever reasons, some conflicts over others. The general impression one gets from this film is that racism is no longer specifically a one axis issue, the classical story of the powerful white hating and mistreating the poor black. It is a story of human fear and distrust of the unknown, the other who lives next door, no matter how rich, poor, powerful, weak, dark or white he/she is. Racism invades every single layer of society, and makes no distinction at all. And, what is more important, everyone is both victim and victimiser in this complex tale.

In Crash two young black guys ─Anthony (Ludacris) and Peter (Larenz Tate)─ complain about the increasing distrust of whites towards African Americans, after

what they say has been an episode of racial discrimination. Only some seconds later, we discover that they are two criminals who spend the time carjacking white rich people ─and, what is even more paradoxical, they do it for a white boss. Two of their victims are district attorney Rick (Brendan Fraser) and his wife, Jean (Sandra Bullock). While the former seems to worry only about how his public racial image will be affected after the incident, the latter criticises the double morality that seems to govern U.S society with respect to race relations; but she goes mad when she sees a shady-looking Hispanic locksmith fixing her houses doors. A mulatto woman, Christine (Thandie Newton), is sexually abused and humiliated by a white LAPD officer (Dillon) when she is caught making a fellatio to her black husband ─a man who has been his whole life pretending not to be black. Nevertheless, she is saved by the same cop from a sure death, after a car accident. A Persian shop owner (Shaun Toub) suffers the consequences of radical racism when a group of strangers destroy his store and call him arab. He then decides to take the law into his own hands as a consequence of which he finds himself on the verge of killing an innocent kid.

I would like to comment on three aspects of the film which have especially drawn my attention. First, that accent is as decisive and determining a marker as race regarding relations of power. Not speaking correct American English is a sign of weakness on your part and a useful weapon in the eyes of your opponent. What correct means in a country and in a city characterised by such a mixture of races, ethnicities and nationalities becomes of course manifestly arguable. All in all, those characters which do not produce language as they presumably should are punished in some way or another, either because they do not fulfil others linguistic expectations or because they fulfil them too much.

The second point I want to mention has to be discussed in relation to the third one and it is how the film gravitates towards overgeneralisations and, in so doing, how it relies once and again on racial stereotypes. The spectator easily

recognises the different social groups since each one is typified by unequivocal representations: the bad niggas, a couple of black Toms, the exotic Latino woman, the racist cop, the tragic mulatto, the Middle East immigrant who finds difficulties to adapt to a new life, Characters in Crash are not only fully stereotyped, but they themselves perceive their own lives and those of others according to simplistic, essentialist qualities. Haggis brilliant narration produces a double simultaneous acknowledgement: out of dramatic circumstances, both audiences and characters gradually discover ─and this is what the film certainly is about─ that nothing really is as it seemed. To mention but some examples, we find out that the carjackers turn out to be not that bad in the end, that insolent officer Ryan is also capable of sharing his fathers suffering or that the criminal-like appearance of the Mexican locksmith (Michael Peña) simply conceals a loving family man.

In this sense the film can be said to rework clichéd formulae with a purpose: that of making clear that identities are nothing but artificial constructions built across 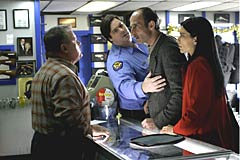 difference ─you are what you are not. In the course of this game of power and exclusion, of projecting your own fears and frustrations onto the other in a way that makes you feel more powerful, characters in Crash initiate an introspective journey of self-discovery. You think you know who you are? You have no idea sermonises bigoted cop Ryan when his rookie partner, Thomas (Ryan Phillippe), resolves to leave him and look for a new colleague, after the incident with the African American couple. Although coming from such a repulsive character, in the end Dillons words prove to be the moral of this fable. Only some time after Ryans reprimand the wannabe young white policeman discovers that the officer was right when, as a result of his own paranoia, he shoots to death an innocent black teenager. At the same time that whites start to assimilate their personal anxieties and fears ─think of irritable Jean and her eventual confession to the Hispanic housemaid Youre the best friend Ive got─, African Americans learn how to cope with their own blackness and, in the case of TV director Cameron, begin to appreciate the price of self-respect.

To me, Haggis film constitutes a brilliant exploration of the human condition in itself, taking this time the racial/ethnic problem as point of departure and narrative structuring element. The films eventual message deviates from the general practice by which most stories have traditionally persisted in offering utopic resolutions and pretended that racial problems could be happily worked out as if by magic. Crash, on the contrary, insists on the difficulties of human reconciliation, as the film ends just as it had started: a car crash and the racial tension aroused as a result. This time, however, the audience is able to hint a hopeful smile.