Fun with Dick and Jane by Luis Miguel García Mainar

White fun with Jim and Téa. 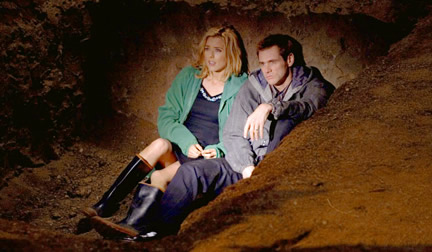 affluence are frustrated when the corporation the husband works for, Globodyne, collapses after it is revealed that its chief executive, McCallister (James Baldwin), has cooked the books. The same day Dick (Jim Carrey) is promoted to vice-president and his wife Jane (Téa Leoni) quits her job Globodyne's shares plummet, dragging Dick and his family's dreams with them. From then on their lives change dramatically as Dick fails to get a new job and bills pile up before they decide to follow the example of top executives and turn to thieving. After a series of minor robberies they will move on to theft on a larger scale, the final turn coming in an extended scene in which they con McCalllister into donating all his savings to Globodyne's ex-employees.

Perhaps labelling Fun with Dick and Jane "a screwball heist comedy for the Enron era", as Variety critic Justin Chang has done, is a bit too much for a film that barely keeps you 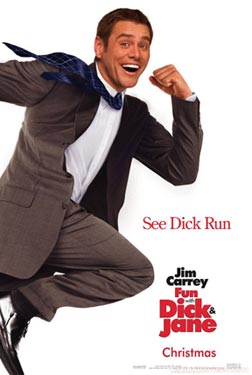 interested in its story. If anything, the film is engaging in its use of Jim Carrey's comic antics to point to the anxiety of losing class status that lurks behind middle-class professionals' lifestyle. However, the same exaggeration that helps suggest such anxiety leads the film to explain financial scandals as exceptions in the American economy. Half-way through the film, and before Dick and Jane decide to take the easy road, Dick tries to get some work by joining a group of Latino immigrants who wait for potential employers to pick them up. When this happens, Dick, still not used to the ways of such a rough labour market, gets kicked out of the truck by a competitor and falls on to the road, inadvertently losing his wallet. Immediately, the police arrive and threaten to arrest those who don't have their papers on them. Dick hears a policeman say his name as he looks at one of the workers and realises then that he is in trouble: his papers are in somebody else's hands. No problem, he says to himself, thinking that he can easily convince the policemen of his truly American citizenship by letting them see how white he is and asking them to call his home so that his family confirm he is nothing but a decent American. But here comes the best joke in the film, since the only person who is at home at that time is his son Billy (Aaron Michael Drozin) who, having spent most of his short life in the company of a Latino babysitter, has actually learned to speak English with a Latino accent. Billy picks up the phone and Dick ends up in jail.

This brief moment points to the nature of Dick and Jane's worries: they fear the loss of economic status that will mean joining the ranks of the unemployed and the illegal, because to

the film being poor means losing their rights as Americans, and this means joining the Latino illegal community. But this brief emergence of the unconscious is lost among the cascading jokes and gags the film is built on, and will only reappear when, near the end, once Dick and Jane have forced McCallister to give away his money to his ex-employees, the film strives to provide answers to everybody's problems. The happy family drive along the promenade as the parents listen to Bill's pronunciation, trying to imitate it. The threat of losing ground has disappeared and the Latino accent is nothing but a sign of their adaptability to the reality of Los Angeles. At that point they meet another Globodyne ex-employee who exultantly tells them he has just got a job in Argentina and, making it sound the best thing of all, has been promised to be paid in Argentinian bonds. The final joke is again about the spread of financial risk in a globalised economy, but the choice of a foreign, South American, country as anexample brings again to the surface the denial of what to many Americans has been a reality in the past few years, following the scandal of Enron.

What the film wants to pass as a bow to the multicultural nature of American societyactually ends up as a reminder of the film's desire to describe the financial crises of American companies as exceptions that to some extent confirm the rule of the country's perpetual bonanza. It is as unlikely, the film seems to say, for those American companies to collapse as it is for a truly American citizen to be mistaken for an illegal day labourer. Those things can only happen to comedian Jim Carrey, the ultimate clown whose naked body appeared not long ago in Vanity Fair magazine covered in blinding white paint: such an appropriate hysterical index of current American fears that it could make Freud salivate.