Written by Juan Tarancón on 18 October 2006. Posted in CCSBlog. 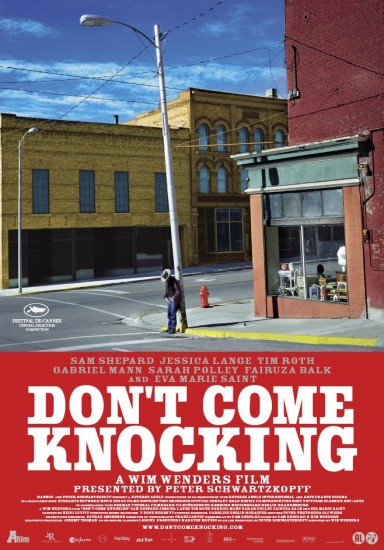 Dont Come Knocking is the long-awaited second collaboration of Wim Wenders and Sam Shepard after the awesome cult classic Paris, Texas from 1984. Although this piece of cinematic trivia will invite inescapable (and in all probability feeble) comparisons, the film seems to be a follow-up to Shepards play from 1980 True West. In Dont Come Knocking, Howard Spence, a washed up cowboy actor played by Shepard himself abandons the set of his latest movie and his hedonistic behavior and travels (from what seems to be Utah) first to Elko, Nevada to visit his mother (Eva Marie Saint) and then, upon the realization that he might have a son, to Butte, Montana. This is a journey that traverses the Great Basin, that section of the West that photographer Peter Goin describes as the most spiritual and magical land, a land of mirages and miracles. Spence, it seems, is embarked in a spiritual search through a spiritual territory.

Although my choice of words might bring to mind the mysticism and occasionally mesmerizing weirdness of Shepards own Silent Tongue (1992), the truth is that Dont Come Knocking is a contemporary tale about the New West that accentuates the alienation of the conquering male in the

twenty first century. Spirituality has been traded off for the glitter of the casinos. In Shepards play, the brawls between two brothers exemplified the tension between two visions of the West. The true West in the title referred both to the solitary life of the pioneers in the open country and to the contemporary domesticated West of suburban bungalows and shopping malls. In Dont Come Knocking the West has already become a hollow reproduction of images that correspond with some standard, familiar, and artificial notion of Westness. The entire Arches National Park that Howard Spence leaves behind is a movie set. In the postmodern opening scenes, the spectator has the feeling that Hollywoods West, with its conventional scenarios, shooting and editing, is more real than the province and the events it claims to represent even T-Bone Burnetts musical score sounds like a spoof, a sophisticated simulation of the likes of Johnny Cash, Guy Clark and Rodney Crowell. And what is more, Howard Spence doesnt belong out of the movie set any more (and any less) than Tom Baxter belongs out of the screen world in The Purple Rose of Cairo (Woody Allen,

1984). As in Allens film, the two narrative worlds merge in Dont Come Knocking, that of the film Spence is making, aptly titled Phantom of the West, and Wenders own film (Wim Wenders himself is once seen as part of the Hollywood crew that awaits for the return of Spence to continue shooting). And, moreover, these two narrative levels even blend with Sam Shepards real life persona in a not inconsiderable number of ways but I dare not take the correlation any further. In short, Howard Spence escapes the artificial West that has been populated and perpetuated by Hollywood films and starts a journey in search of roots and bonds. The journey takes him first to his mother (whom he hasnt seen in decades) and to another manifestation of the West, the cosmopolitan gambling emporiums of Nevada. These postmodern metropolises constitute the absolute act of simulation  they erase history, they swap the myth of the West for any myth money can buy with no sense of time, place or origin, and, furthermore, they are an ecological and social disaster. From here he travels to Butte, Montana in his fathers vintage Oldsmobile, and to yet another expression of the West and the western landscape in the twenty first century, that of the small post-industrial city with its Victorian homes, large turn-of-the-century Modernist buildings, brick storefronts, both natural beauty and industrial scenery, and a sense of history and community.

In Butte, Howard will meet old flame Doreen (Jessica Lange), their son Earl (Gabriel Mann), and an unheard-of daughter, Sky (Sarah Polley), who has gone to Butte to lay the ashes of her deceased mother at rest. Also in Butte, Sutter (Tim Roth), an insurance company detective that has been tracking Howard since he left the movie set, catches up with the missing actor. In an overall

unconvincing drama (that, nevertheless, offers other thrills), two episodes resonate with the appealing magnetism of previous Shepards and Wenders works: a conversation Howard has with Doreen early one morning in the downtown streets of Butte and a singular montage that shows Howard on a wrecked couch from dusk till dawn. The two women in this far-fetched family radiate a feeling of poise and peacefulness that contrasts with the anxiety and the sense of loss of the males. Doreen is the only character that seems to have found her place in spite of the contradictions that plague her, which shows both in her present status in Buttes society and in Langes cool and tranquil performance. Howard, for his part, gains some kind of understanding during his wakeful night on the sofa and this seems to involve the acceptance of his entrapment in the hyperreality of the New West (he causes no trouble when Sutter takes him back) and maybe some ease and solace after having met his son and daughter, although Sky looks upon the whole situation from a risk-free distance and Earl is as confused and unruly as his father.