Written by Celestino Deleyto on 29 October 2006. Posted in CCSBlog.

In the name of the father

Up to The Curse of the Jade Scorpion (2001) and A Hollywood Ending (2002), Allen had been criticised because 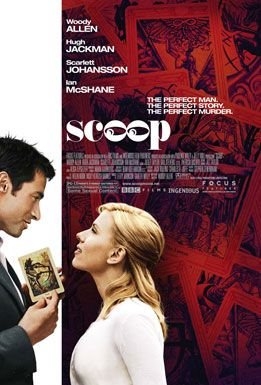 he was still casting himself as the male love interest of his own films. When in Curse he became at 65 the object of desire of no less than Helen Hunt, Charlize Theron and Elizabeth Berkeley, many thought he had gone too far. Maybe for that reason, since Ending he has either played a father figure to Jason Biggs in Anything Else (2003) or disappeared altogether from the cast in the two that came after. With Scoop he returns to the top of the bill as another father figure, in this case to Scarlett Johanssons Sondra Pransky, a U.S. student of journalism visiting a friend in London .

Therefore, although bashing the latest Allen movie has become something of a favourite sport with the critical institution, many spectators will be at least glad that he has at last started to act his age. In truth, perhaps now that he has turned 70 he should start considering grandfather parts. Allen as a father had already figured prominently in Everyone Says I Love You but even then his main role was as a lover figure with Julia Roberts and Goldie Hawn there to keep his libido going. It was, however, in the earlier Crimes and Misdemeanors (1989), a film that has been compared to Scoops London companion piece, Match Point (2005), that the Brooklyn director had included a similar relationship. In that story, his failed documentary filmmaker Cliff Stern ends up discarding all his romantic attachments in favour of his father-daughter relationship with his niece Jenny (Jenny Nichols) who for him represents the hope of future generations. In a world in which love and desire only bring about suffering, betrayal and loneliness, the icon of contemporary nervous romance chooses family ties over romantic entanglements.

his comic mannerisms, is at first reluctant to help Sondra investigate the scoop she has been offered by the ghost of famous journalist Joe Strombel (Ian McShane) but soon gets drawn into the case and happily plays the unconventional detective, just as equally reluctant Larry Lipton is convinced by his wife Carol (Diane Keaton) to expose their respectable neighbour as the murderer of his wife in Manhattan Murder Mystery (1993). In this case, the suspected murderer is wealthy upper-class Peter Lyman (Australian actor Hugh Jackman playing the young English aristocrat as a cross between Rupert Everett and a young Clint Eastwood), with whom Sondra predictably falls head-over-heels in love in the course of her investigation, ignoring her new friends growing alarm. The interesting point is that, in order to help her with the investigation of the murders, she asks Sid to pretend to be her father, an oil magnate from Palm Beach . In the course of the film, a genuine affection develops almost imperceptibly between fake father and daughter and this relationship takes centre stage over the more conventional romantic one.

So, there are no erotic undercurrents whatsoever between Sondra and Sid. She could not possibly find him attractive and he does not look at her twice. Yet, if we take, say, Manhattan Murder Mystery as a point of comparison, things have not changed that much. Just as in that film he was the loving husband successfully preventing his wife from falling into the arms of suave Alan Alda, here he turns into the caring father who fights a winning battle for the heroines affections with the attractive, mysterious and much younger rival. At the end of the film, his brand of masculinity still wins the day. In becoming a father, Allen has not given up the power his earlier characters wielded over their female counterparts or his success in the battles he has been fighting with other men. The ending of Scoop confirms that the trend continues, even if now he cannot hope to end in the heroines bed. At least he remains her source of inspiration and, well, adoration.

In casting himself as the U.S. American counterpart to the English aristocrat, Allen continues in this film Match 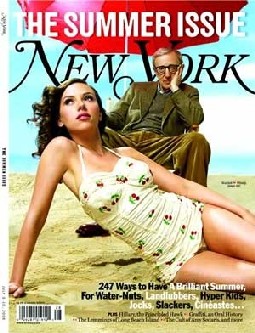 Points acerbic critique of the British class system, even if the register has changed. They may be swimming in privilege but they are still no match for the American everyman. In one of the best jokes of a film full of funny one-liners, he tells Sondra that he could never live in London because of the language barrier. Like Allens best jokes this line neatly encapsulates, by being not just about language, the power of comedy to speak powerfully against injustice. Maybe for his next English film, Allen will notice that there are more people in England like the spectator from Manchester Splendini comes across in one of his shows. However, important as the social critique may be, the film is perhaps most interesting as a contemporary romantic comedy diagnosing the current state of intimate relationships. In this, Scoop is not only linked with the grimmer Crimes and Misdemeanors in addressing the crisis of modern romance but also becomes something of a Scarlett Johansson vehicle. The New York star, at the moment one of the hottest properties in Tinseltown, not only has grown enormously as an actress since her sleepy-eyed and rather irritating performance in Lost in Translation. She is also beginning to embody a certain brand of early twenty-first century young femininity and a post-feminist attitude to heterosexual relationships. From the point of view of her fledging star persona, Scoop plays almost as a sequel of In Good Company (Paul Weitz, 2004), in which she ends up choosing her (this time real) father (Dennis Quaid) over her young boyfriend (Topher Grace). Both films become part of a recent tendency of romantic comedy that favours friendship, familial relationships and even casual sex over long-term romantic attachments, thus offering a relevant picture of the state of love in contemporary culture.