Written by Luis M. García-Mainar on 10 January 2007. Posted in CCSBlog.

Be martini, my friend! 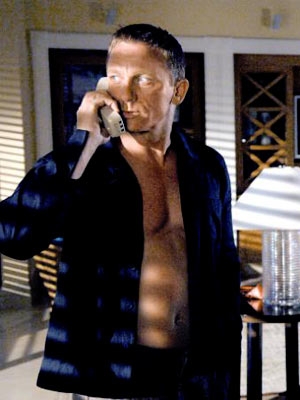 Casino Royale, the latest entry of the James Bond franchise, rewards the viewers' expectations of smooth rides and bosomy women, but Daniel Craig as the new 007 brings in the kind of animal magnetism Woody Allen complained about in Love and Death. Craig's hunky presence offers both male and female spectators the same kind of voyeuristic pleasure provided by so many models-turned-actresses in the previous films of the series, only here the tone is more playful-just check out his parodies of Ursula Andrews' beach scene and the Martini commercials pouting-lips man. The film follows the process of Bond's maturation from ego-obsessed action hero to cool secret agent via a cards showdown and a romantic affair with Vesper Lynd (Eva Green). Once he has learned to add coolness to his impetuous ego, he comes out as the 007 we have known all along: after all, this is the inevitable prequel to the series. In the process, the story moves from Prague to Uganda and Madagascar, then to London, the Bahamas, Miami and Montenegro, and finally to Venice, a tourist-like tour typical of the Bond films that increasingly becomes a metaphor for globalisation and its post 9/11 discontents: fleeing capital and world terrorism.

Chase sequences are a staple of the action movie, and Casino Royale includes its fair share of them. The first one we view takes place in Madagascar and involves Bond going after a would-be suicide bomber first around a building site and then inside an embassy. The sequence allows the film to describe our hero as competent and physically resilient but in bad need of polishing and glamour. Reportedly, the five minutes of the chase took three months to prepare and shoot, and Sebastian Foucan, one of the promoters of 'free running' or 'parkour', was hired to play the bomber. It is actually the difference between Foucan's and Craig's moving bodies that the sequence uses to make its point. Craig's muscled body progresses with difficulty to invariably fall off cranes or roofs. He makes up for his lack of physical prowess with a superior imagination and will power which helps him cut corners to keep pace with the villain. Meanwhile, Foucan's agile body is seen to expertly run, jump and almost fly around the obstacles he meets on his way, always landing on his feet. At one point both of them have to face a wall with only a narrow opening at its top: while Foucan slips through the hole by reaching for an iron bar on the ceiling and propelling his body with his arms, Craig is seen to crash through the now apparently plaster-thin wall in a cartoonish way. This moment sums up the whole sequence: Bond's rigid, awkward running style shows him as a tough guy out of his depth, not integrated in the surrounding space and only superior in intelligence and determination to the terrorist; the bomber's mastery of both his body and the space he inhabits reveals he belongs in an environment that offers him protection but which is nevertheless not enough to keep him safe from the attack of Her Majesty's über-animal.

To its practitioners, free running consists in running and jumping through techniques meant to maximise bodily strength and flexibility in

order to overcome physical obstacles, thus tracing one's own route across the city. They relate it to Eastern philosophies' conception of the ductility and adaptability of the human mind-body to the course of life, condensed in the metaphor of the fluidity of water: they progress through the city as smoothly as water flows to get round stones. Free running thus allows them to master urban space by avoiding the socially sanctioned ways of moving in the city, jogging or walking. By running and jumping at high speed, they open new paths that defy convention and assert the capacity of individuals to find their way in society.

The dramatic content of the chase-its Manichean representation of first world rationality against third world slippery threat-points to the perennial colonial attitude lurking behind the Bond imaginary, but the fact that the film has borrowed this kinetic form is proof of its sensitivity to new urban cultural forms, something crime movies have shown since the gangster film appeared in the early thirties. Much as those flashy gangsters incarnated people's desire for economic improvement, Foucan's character embodies, if only fleetingly, the emergent longing for a new relationship between citizens and social space based on integration rather than violent mastery. However, that this possibility is played out by a character that so directly evokes the danger of global terrorism also proves the resistance of contemporary culture to entertain alternative or 'imaginative' responses to such serious issues: a dose of good old heroism is always better, and that is on offer for the rest of the film.