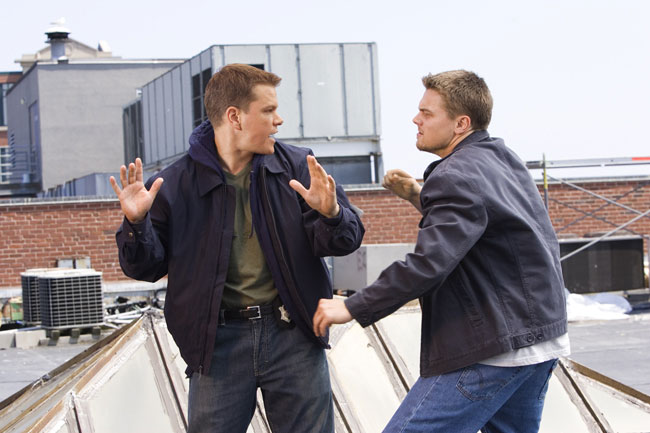 Goodfellas in its frantic rhythm and wealth of accompanying musical themes, which lend the dangerous world of the characters the energy one expects from contemporary crime drama. Fraught with excellent performances and appealing secondary characters, it has the taste of old wine, read classic genre cinema, mixed with traces of the newest soft drink. While it covers the usual territory of the gangster film and the cop movie, it also suggests connections with contemporary issues through its most self-aware and troubled character: Billy Costigan, the only character billed Jr. in an underworld where criminals seem as related to one another as the Von Trapp's. Like Mystic River, helmed by that other Hollywood grandfather Clint Eastwood, it is set in a part of the country that evokes accounts of the original fight for independence, which sets off connotations of national crisis that fit the recent history of the United States.

Like every gangster film before it, The Departed deals with the way to economic success of a socially underprivileged group. Here the Irish community of South Boston replaces the Italian mob Scorsese had pictured before but the principles (sic) are the same: criminals leading a glamorous way of life, violence that instils fear into those to be shaken down, and constant tests where masculinity vindicates that domination. The same tension between straight-faced and parodic display of lifestyle and violence that appeared in the director's previous work looms here: we see Sullivan complain about the absence of 'duck l'orange' in a French restaurant's menu, or one of Costello's thugs persuade a victim to pay by yelling "Make more money, this is America" while he beats him to a pulp. Masculinity, however, is a more serious business, especially to Sullivan, who is constantly at pains to prove what a man he is, either to other men or to every woman he meets. By contrast, Costigan fights an inborn male reserve to acknowledge that the strain of his life is more than he can handle in meetings with Madolyn (Vera Farmiga) which stay in our minds well after the film has finished. It is both Damon's and DiCaprio's fading boyish looks that bring complexity to their characters, but probably DiCaprio's Costigan steals the movie with, to quote Madolyn, a "vulnerability" that wins him the audience's sympathy from the start. The fact that his character becomes our main point of identification, and is never used to voice the parody of gangster life, proves that the centre of the film has moved away from the joyous postmodern game to a concern with the state of men in contemporary society.

The crime film is particularly adequate to express social ambivalence about the law, something proved by the salience of the criminal in the genre, but in The Departed we find a more widespread ambiguity about institutions like the Massachusetts State Police and, by extension, political institutions materialised in the golden cupola of Boston's State House. The view of it Sullivan enjoys from his luxurious apartment proves he has made it into the upper class but also that his 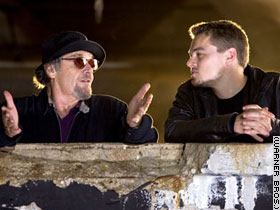 aims are higher: he has infiltrated the police but hopes to reach the ruling class too. He has learned to bend the rules and his prize will be a warm place in the established order. Costigan, however, is given the choice of playing by the rules and the consequences are devastating, as he finds himself outside the protection of the police. Assuming his role as a 'good boy' who guides his behaviour by others' lessons, Costigan in fact faces a world where the institutions that forged him do not actually support those who, like him, choose the right path. When in the middle of one of his lobster meals Costello asks Costigan if he would like to go back to school, the question carries a significance and ambivalence that sum up the whole film: is Costello genuinely concerned about Billy's future? Does he want another mole in the State Police? Billy's refusal is also richer than it seems: has he learnt that the rules don't work any more and school is useless? Does he still believe in his loyal cadet role? Given the extent of deceit and betrayal in the last section of the film, one would think the question is irrelevant and that the film has taken us back to the realm of parody. But one cannot forget that the increasingly fast pace of the last third of the film is probably most in tune with the feel of contemporary life, where ambivalence, uncertainty and vulnerability prevail. Against the utopia that emerged in that same part of the country in the 17th century, and which was bound to spatial, and therefore stable, metaphors like the "city on a hill", the present offers accelerating change and constant movement, and by the way, as is the case with most crime films, humankind still means mankind here too.