I  Want my Life Back, Please!

Garden State was very successful in several small independent film festivals, being acclaimed by both critics and audiences. The film was written and directed by Zach Braff, who also starred in it. Braff is better known for his appearance as the Liptons son in Woody Allens Manhattan Murder Mystery and his comic role as doctor J.D, the protagonist of the TV series Scrubs (2001-   ). The rather simple and very visual comedy of this TV show is mixed in Garden State with a subtle and ironic sense of humour, so characteristic of Braffs work as an actor in The Broken Hearts Club: A Romantic Comedy (2000)or The Last Kiss (2006). Braff has also personally selected every song in the film, for which he has won a Grammy award.

The film tells the story of Andrew Largeman (Zach Braff) who comes back home to New Jersey (the so called Garden State) for a weekend after nine years away. The reason: his mothers funeral. His father, a psychiatrist, has Largeman over-medicated in such a way that he represses every feeling he may have, and is unable to show any kind of emotion. Back home, he will leave his medication behind, meet his old friend Mark (Peter Sasgaard), and run into Sam (Natalie Portman), whose particular view on life and emotions, radically different from his, will change his life.

The film shows us that our lives, for one reason or another, are not always under our own control. It is rather something that we have to conquer, and this is part of being human. The protagonists, as well as the secondary characters, are all restricted by something that prevents them from being in control of their lives. Largemans life is controlled by his fathers medication and his own guilt, Sams by her own compulsive lies, Marks by her mothers relationships and way of life The three of them will try to get their lives under control again with the help of others.

Though the films subject matterthe journey back home, the first true love, the disorientation of a group of people in his twenties, etc.has appeared in many other films before this one, there is something fresh in Garden State.  The spontaneous way in which the story is told  keeps the spectator wanting to know more and more about the protagonists and what is going to happen next, which makes the film very easy and pleasant to see. All this spontaneity and freshness has much to do with a bunch of great performances (especially Portmans) and the interesting overlap of genre conventions.

The film is a compendium of clichés from different genres put together in such a way that they make the spectator move smoothly from laughter to almost tears. It is not by chance that Garden State has been very accurately labelled a dramatic comedy. Elements typical of drama (such as the funeral, 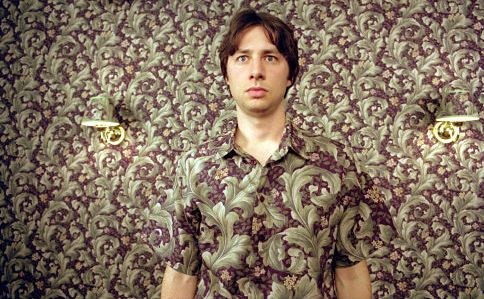 or the heros tragic and harsh childhood and his resulting empty life) are always shown through a suffocating mise en scène, especially at the beginning, which creates a great identification with the claustrophobic situation of Largemans lack of control over his own life and feelings. But these elements later develop into comedy and mix with many funny moments of a very visual type of humour. With Sams appearance, much lighter, colour and open spaces are brought into Largemans life and also into the mise en scène. Other generic elements are the evolution of the character by returning to his roots (very common in road movies) and, of course, the romantic elements: the made-for-each-other characters who seem so different at the beginning, the girl who changes the boys life, etc. At the end this interesting mixture unfortunately turns out to fit the traditional Hollywood conventions, but it still allows some room for the spectators imagination and their own interpretation, which leaves you with the good taste of having seen an independent film.