The History Boys, by Sylvia Solé

Written by Sylvia Solé on 16 November 2007. Posted in CCSBlog.

History is just one f*** thing after another
The History Boys(Nicholas Hytner, 2006)
Sylvia Solé 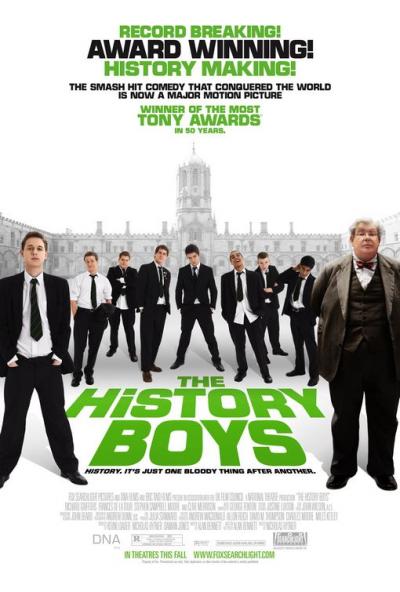 We have seen countless films based on plays before, and so this is not a revelation at all. The fact that the play on which this film is based, The History Boys (2004), won six Tony Awards and was nominated for another one isn't shocking, either. The amusing story of this particular play is that even after being adapted into film it is still a play, but to be seen in a cinema or in our own living room, if we are capable to isolate ourselves from the environment-people talking, mumbling, eating, and the like. Otherwise, it is the same director, the same original, and absolutely brilliant cast (with some additions), the same scriptwriter (Alan Bennet), the same wit, the same striking monologues.

The History Boys has two main themes: one is the way history should be taught and appreciated; the other, which is perhaps more striking (but only perhaps), is the way that in 1983 17-year-old boys put up with light sexual harassment from one of their most beloved teachers in Northern England.

These boys are talented and attend Grammar School, but but they live in Sheffield, Yorkshire, an industrial zone in Northern England which in the 80Ùs would surely have been even more industrial and less intellectual than nowadays.. They have all passed their A-levels and will now be preparing to face examinations for Oxford or Cambridge, a huge opportunity for them, a dream for any student with their capacity and willingness.

This group of students will teach their teachers how to teach better, and they will make history together.

Dorothy (Frances de la Tour) is the leader of historical theory, of fact. Hector (Richard Griffiths) is the walking Encyclopaedia of words, quotations, places, and names. Irwin (Stephen Campbell Moore) is talent, new ways of approaching history teaching. As he says, "But this is History. Distance yourselves. Our perspective on the past alters it. Looking back, immediately in front of us is dead ground. We don't see it, and because we don't see it this means that there is no period so remote as the recent past. And one of the historian's jobs is to anticipate what our perspective of that period will be... even on the Holocaust." He teaches them to use their minds in order to not just retell history, but to practice it again and again.

Hector, on the other hand, wants them to learn language, words, but he doesn't want them to adore words in a reverential way, he wants them to be part of literature. He is a romantic, an admirer of full Beauty, the Platonic sense of Beauty, and that is what he tries to teach his students through poetry, his partial look at history, his living in the past, his way of having fun in class and making the boys have fun. They admire and appreciate him so much that they absolutely ignore, and give no importance at all to, his sexual harassment, which is quite "a new" attitude contributed by the film. No moral stuff in this one, you see.

The headmaster, obsessed with control and power and a not too well educated man himself, does not really care about it either, but about the future of the school and his own reputation. The boys are just bored, and let it pass. The absurd moral prejudice is pushed aside in order to see things from a less British-Catholic perspective, a less hypocritical perspective. As a matter of fact, when Hector has to leave the school, this will affect the boys to such an extent that they come to know how much they actually empathised with him as both teacher and man.

As to the students, Posner (Samuel Barnett) is the most impressed by, and certainly the closest to, Hector. He

is the perfect student for him. He loves poetry, learning, and teaching--he will actually become a teacher himself. He loves Hector's way of teaching, his love for performances and staging what they call "film endings". He is the only really concerned student when Hector has an emotional breakdown in the middle of a lesson. The other students are just mere spectators, willing to go through all their other phases in life and get to their final point. They do care but not as much as Posner (Oh, Pos, with your spaniel heart--Scripps) does both for Hector and his "General Studies", the subject he teaches.

Everything in this film is ironic, a harsh critique of social and academic rules. Everything is dramatic: growing up, getting through the end of adolescence and starting to grow up in a hostile environment like Oxford and Cambridge. But anyhow, the dramatic view is so ironic and the ironic view is so dramatic that they seem to mix. Daikin's (Dominic Cooper) commentary at Hector's funeral, "Still at least I asked him", referring to his sexual proposal to his other teacher, Irwin, before the accident, is so coarse, while other students are preparing to sing "Bye, bye, Blackbird", that it is just a fantastic laugh even at such an uncomfortable moment. Sad, but true. Infinitely dramatic. Infinitely ironic. 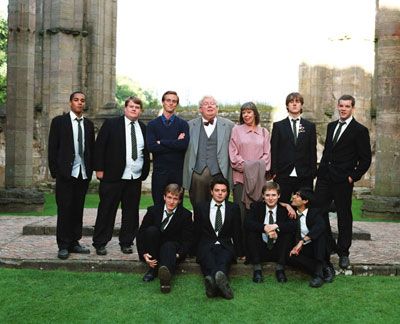 Very different from Hollywood's Dead Poet's Society (Peter Weir, 1989), unbelievable though it may seem as not many films on teacher/student themes are different from each other, this is not a story of superteachers, but a story of superlearners, which include both teachers and students. It is a story of "passing the parcel", as Hector once says; a metaphor of a children's party game in which a package is passed from one person to another until the music stops. When this happens, that person has to unwrap part of the package, until a main prize is found. The thing is that there are small prizes between the layers, and Hector was referring to that, to the fact that in life, what is important is the journey itself, not just the point of arrival. It is a story about making history, but without leaving a trace; just passing knowledge to others.