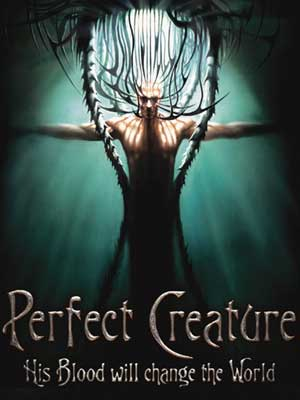 Let it be said: I hate vampire films. I will gladly make an exception for Bram Stoker's Dracula(Coppola, 1992), but the great majority of bloodsucker flicks - especially the newfangled action kind - are just too boring for words. It is as if the idea of centuries-old creatures incited screenwriters to indulge in centuries-old cliches about love, lust and death - not to mention ransacking Nosferatu's (Murnau, 1922) iconic visuals for yet another cheap thrill.

Nevertheless, being an addict to film magazines, I happened to stumble upon a brief mention of this film and, to my own surprise, I had to blushingly admit it actually sounded good; so good, in fact, that I had to give it a try.  I am blushing again now at the need to announce that, despite my misgivings, watching Perfect Creature may have been one of the best ideas I have had in a while.

novels have told us about, but rather the beneficent partners of mankind. Imagine a self-styled  "Brotherhood", an honest-to-God church, devoted to the health and prosperity of mankind. Since they were first spawned by a genetic mistake, 300 years before the events depicted in the film, vampires have not only not killed human beings but helped them. Imagine their grateful wards paying them back in blood for their feeding. Imagine an alternate reality in which trafficking in influenza vaccine is cause for conviction, but prostitution isn't, a reality much like the 1960s but where zeppelins and a heavy industry look evoke the 1920s and 1930s, too. A retro-futurist alternative reality: nice beginning.

This crazy but wonderful film was made in 2006 in New Zealand. It was filmed in Auckland and co-produced with the UK, where most of the perfect cast of this perfect creature comes from: among others, Dougray Scott, Saffron Burrows, and the amazing Stuart Wilson. After making its way through Cannes and other film festivals, it will be finally released in Spain next February 18th: 'only' two years after its premiere.

The film gains much from the superb creativity of its mise-en-scène.  The run-down industrial gloom of its visuals is an innovative counterpoint to the invariable velvet drapings in which the melancholy of the vampire myth is expressed in most film and literary renditions. Its theatrical grandeur provides a fitting backdrop for the nuanced characters ‒wonderfully portrayed by protagonists Scott and Burrows‒ and intricate plot. For once, you will find no Bela Lugosi wannabe here‒ not even the villain.

Because, of course, there is one. But he is an atypical one, even in his reasons for choosing the dark path. And in a further atypical twist, he may actually getting close to hitting his mark. Fear not, I will not give out whether he does; you will have to watch the movie yourself for that, but there is little doubt that Perfect Creature hit its.