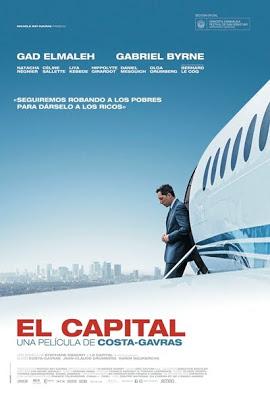 Following the political tone of the Goya ceremony awards, Maribel Verdú dedicated her prize for best actress to "all those who have lost their home, their hope, their future, even their lives due to an unfair and obsolete system”, and finished her speech by quoting from Costa-Gavras’ Le Capital: “a system that permits robbing the poor to give to the rich”.

This quotation corresponds to the words uttered by the main character at the end of the movie who, looking directly at the camera, finally shows his cards, exposing the evils of capitalism. Although the film may result, in some occasions, a little bit tedious in its didacticism on the causes and consequences of the current financial crisis,

it succeeds in exposing the supranational power of banks and the crisis of democracy at the heart of Europe by becoming itself a transnational film: not only the film credits show the “transnational” origins of its director (Costa-Gavras), screenwriters (Karim Boukercha, Costa-Gavras, Jean-Claude Grumberg) and main actors (Gad Elmaleh, Gabriel Byrne), but the characters, in their continuous meetings in the non-space of a plain taking them from Paris to Miami, London or Japan, speak in both French and English.

However, what makes the film disturbingly transnational is the inclusion of the “capital” itself which, as if it were one more character in the movie, moves constantly all around the world as an immaterial presence haunting the bodies of those who inhabit the high spheres of power. This is the case of the main character, Marc Tourneuil (Gad Elmaleh), who, possessed by this ghost, abandons the cozy walls of his home to form part of the trasnational overclass whose global power increases as the very frontiers that created democratic States inevitably blur (Bauman, Liquid Fear, 2007).

This is powerfully depicted in, what I believe, is the most striking sequence of the film: the scene showing all the employees of the bank on a screen, believing that their frozen presence in a video-conference with the CEO of the bank endows them with a say in the running of the company. Far from being a democratic boss defending the rights of the workers based on French – and/or European – ideals, Tourneuil reveals himself as a demagogic and cynical manipulator who reduces staff to increase profits while rising even more his astronomical salary. The potential power of “the multitude” is contained within a screen under the illusion of fake democratic representation, which is undermined by the control of a financial elite that extends its power through the global, invisible networks of the “capital” (Hardt and Negri, Commonwealth, 2009). This scene from Le Capital, was probably in the mind of Maribel Verdú while she mentioned Costa-Gavras’s film. I hope that, next year, at the Goya ceremony awards, there are also Spanish films that speak out the harsh realities of Spanish society.