Written by Celestino Deleyto on 16 June 2013. Posted in CCSBlog. 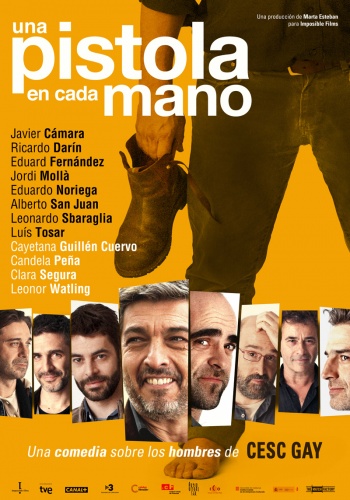 Una pistola en cada mano (2012) is Cesc Gay's sixth feature film and the fourth in which he has collaborated with scriptwriter Tomás Aragay. Together, these films constitute an impressive corpus and, given the present state of generalized mediocrity in Spanish cinema, the surprise is how little known these films are. As we have recently seen with Los amantes pasajeros (2013), not even Almodóvar can guarantee the sustained brilliance achieved by Gay/Aragay in all their films. While Catalan cinema or, rather, Barcelona-based genre cinema has proved its industrial viability through the proliferation of mostly horror flicks and thrillers, these very Catalan filmmakers propose a very different recipe: small realistic films, based on very strong and rigorous scripts, apparently simple but highly sopihisticated visual style and mise en scene, and frequently brilliant performances from relatively well-known actors.

Gay and Aragay's stories, like those of Eric Rohmer or Woody Allen, tend to revolve always around the same type of characters and social situations--professional urban middle-class men and women who tend to live in Barcelona and occasionally go on holiday to the Catalan Pyrenees or a nearby beach. Yet, their genius at capturing the psychological complexities of the contemporary experience multiplies the evocative power of the stories and the situations the characters find themselves involved in. To a Spanish spectator from outside Barcelona, all of these people look unmistakably Catalan and yet in Una pistola en cada mano, such well-known non-Catalan actors as Javier Cámara (in his second presence in a Gay/Aragay film), Luis Tosar, Ricardo Darín, Cayetana Guillén Cuervo or Leonardo Sbaraglia apparently find it easy to absorb the "Catalanness" of the filmmakers' stories without giving up their own personas. If nothing else, this wonderful film suggests the arbirtrariness of certain identity-bound discourses and the difficulties to pinpoint local identities even at the present moment of discursive struggle around related issues. The celebration of difference is all very well but, in Gay/Aragay's world, people, especially men, are often very predictable, no matter what their accent portends.

Una pistola en cada mano confronts through five different segments and a final epilogue, the issue of masculinity, the five stories focusing on an aspect of contemporary men's inability to communicate their feelings, their proclivity to always make the wrong decision, and the impact that their generally childish behaviour has on the women around them and on their own lives. Narratively all the stories are a joy to behold, always psychologically spot on and often hilarious. The actors clearly look like they are enjoying themselves and give their best in their very concentrated appearances. Candela Peña won a Goya for her performance but anybody who has seen the film would agree that another six or seven members of the cast equally deserved such award.

The vagaries of the film industry are often difficult to apprehend. Gay and Aragay are virtually unknown filmmakers, particularly outside Spain, yet there are few directors nowadays who can boast such a consistent oeuvre. Earlier films like En la ciudad (2003), Ficciò (2006) and V.O.S. (2009) were all minor masterpieces, but from the evidence of Una pistola en cada mano what's to come will be even better. The artistic success of these films is probably inextricably linked with their low-key quality and the limitations of the budgets, which are invariably turned to the films' advantage, but one can't help lamenting the inconsistencies of an industry that so far has failed miserably to make these small gems visible to much wider audiences.