Written by Celestino Deleyto on 06 July 2013. Posted in CCSBlog. 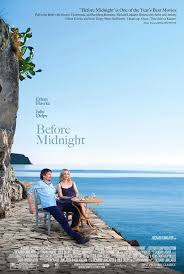 In a film world dominated by inane sequels of comic books competing to top each other with the most sophisticated and silliest special effect, the third installment in the saga of Celine and Jesse’s ongoing relationship is a welcome exception. While socially the focus seems very narrow, dealing as it does with two middle-class, well-educated, extremely articulate not-so-young-anymore people, the films’ cosmopolitan outlook as well as the depth of their thematic concerns is ever expanding. However, what is most striking in this series is the wonderful harmony between form and content, the three films becoming a very unusual example in contemporary mainstream cinema of classical decorum. At the beginning of Before Midnight, after saying goodbye to his son at the airport, Jesse (Ethan Hawke) walks out to meet Celine (Julie Delpy), who is standing outside the car, talking on the mobile phone. As the two characters get inside the car, the camera follows them in from Jesse’s side and then swiftly and slightly pans right to show  twin girls sleeping in the back seat. This is the way the film has to tell us that our protagonists, whom we had last seen together in her Paris apartment with Jesse thinking about which flight to catch back to the US and his American family, now, nine years on, have two daughters. The whole film, like the two previous ones, excels at giving the illusion of real life just unfolding in front of us, but this is achieved precisely by means of very rigorous and carefully planned formal systems. It’s a joy to look at these two complex and very familiar individuals grappling with their lives together, but it’s even more satisfying to sit back and appreciate the art involved in the pretense. Delpy and Hawke’s impeccable performances have kept us wondering for 18 years now about how much those characters are like them. The illusion is nothing short of perfect. Jesse and Celine’s lives, on the other hand, are far from perfect and, as we become closer and closer to them, even their irascibility, their sarcasm and their many shortcomings touch us deep in our hearts. I can’t wait for 2022 (oh, my God!) and the next episode. They’ll be 50 then. Unbelievable.