Written by Julia Echeverría on 16 July 2013. Posted in CCSBlog. 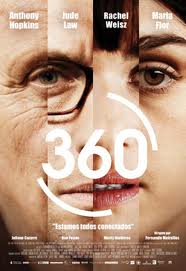 The ingredients that make a movie successful are sometimes hard to  predict. Films with first-rate actors, high production budgets, high-quality source material, and renowned directors and scriptwriters may become complete flops. This has been the case with Fernando Meirelles’ latest feature film, 360 (2011), which has passed widely unnoticed through world theaters (it was even released in Spain a year later, last June), and has received the condemnation of most critics.

The ensemble movie, composed by a cast of international actors among which some well-known faces such as Rachel Weisz, Anthony Hopkins, Jude Law or Ben Foster stand out, intends to be a free adaptation of Arthur Schnitzler’s play Reigen (aka La Ronde), a story that links various archetypical characters (The Whore and the Soldier; The Soldier and the Maid...) in a circular structure by means of their chained sexual encounters in fin-de-siècle Vienna. Scriptwriter Peter Morgan has taken the essence of the play and rehashed it into our contemporary globalized reality, setting this circular chain of chance meetings (also linked by sex, or sometimes the absence of it) in various world cities: Vienna, London, Paris, Denver, Rio de Janeiro, and back in Vienna again. The cities remain mostly unidentifiable in the film though, since the action takes place mainly in those intermediary non-spaces of planes, airports and hotel rooms of which transnational stories are so fond of, helping to create in this case an uneasy atmosphere of aloofness and threat.

As in Schnitzler’s play, characters verge on the prototype too –a Slovak prostitute and the pimp; the wife and the lover; the father who lost his child…–, and we get such a short and fragmentary glimpse of their individual stories that it is completely understandable why the movie has received the general criticism of being too shallow. Yet, however short and prototypical, some of these episodic stories turn out to be incredibly suspenseful and compelling, as when a spiteful Laura (María Flor) unknowingly invites a sex rapist (Ben Foster) into her hotel room, or the prostitute’s sister (Gabriela Marcinkova) gets in the car of a stranger. The (hopefully intentional) shallow depiction of these characters helps to reinforce a feeling of constant risk, disconnection and fragmentation, qualities that, as the movie seems to imply, are lying at the core of intimate relationships in our globalized world.

Meirelles succeeds in giving shape to these ideas by means of a camerawork that recalls his previous movie, Blindness, with an aseptic mise-en-scene in which cold silvery colors predominate, and with an abundance of reflections and fragmentary split screens. Some sequences, as the one in which Sergei (Vladimir Vdovichenkov) is falling asleep while driving, portrayed by means of blurry subjective shots, seem to be direct inheritors of his previous film.

This artsy film style, together with the metaphysical tone and global subject-matter, mark Meirelles’ definite distancing from his first urban social dramas based in Brazil, (Maids, City of God), for which he became internationally distinguished. 360 is certainly not Meirelles´ best film, but it is not another Babel or Crash, as it has been constantly discarded as. There is no apparent causality here; no butterfly effect―each story is thinly connected with the following in a linear sequence, building a closed circle instead of an endless radial network. In that sense, the film functions more as an intended fictional parable than as yet another account of the interconnectedness of individuals in contemporary societies.

We’ll have to wait for his next movie, Rio, eu te amo, the new installment of the so-called Cities of Love franchise, to see if he ‘returns’ to a more locally-based social cinema, or if, on the contrary, he continues to explore this widely criticized conceptual style.

#1 Celestino Deleyto 2013-07-20 12:06
I think critics' general dislike of multi-protagoni st films tells more about the critics' preferences and I'd say prejudices than about the films themselves. Rather than accept the genre's conventions and looking at what the individual films do with them, they dismiss them outright. I think it may have something to do with ambition. Critics tend to sneer at ambitious films and ambitious directors (there are exceptions, of course: Terrence Malick, Paul Thomas Anderson are always good, no matter how boring their films may be--and they have both had their fill of extremely boring films. But this has nothing to do with multi-protagoni st films.
Refresh comments list
RSS feed for comments to this post