The Wolf of Wall Street

Written by Sergio Marqueta on 02 September 2014. Posted in CCSBlog. 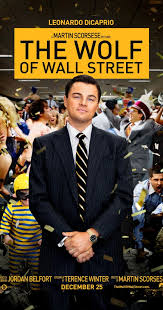 We might be facing one more revision of the American Dream’s rise and fall, in the white tradition that runs from Jay Gatsby to Clyde Barrow. Except this time, within advanced capitalism, excess would succeed in overcoming itself –in such a powerful twist that it even transcends film genre itself, approaching another American folklore classic in order to survive: the cult object.

However, in its disproportion this is not Oliver Stone but something more refined. If we can find a recurring theme in Scorsese’s filmography, it is the one about being a non-WASP American white. Used to being protected by the community, religion, family… that is, by a stable identity, it would now seem to be the turn of an extreme, aseptic individualism. Then, a holler moans, the blues overflows and the enemy comes riding with Mrs. Robinson. No. On this occasion, when the universe created by Don Draper has devoured itself, the non-WASP white finds shelter in blackness.

Nevertheless, blackness is not given by natural contact or cultural attention, negritude implies a construction process that is easily recognizable and thus controllable. Based on the representation of African-Americanness as amoral and blasphemous, as evil, as Dionysian-atavistic and animistic, Belfort doesn’t respect death or the expected seriousness for his role –he can be transformed into a black joker, the jester. He even tries to emulate Jesus Christ, picking up the hopes of the disadvantaged and turning them into opportunities. Impossible mission without his gang –not friends–, sharing the loot with them and occupying a country they don’t belong to–“Fuck you, U.S.A.!”.

This wealthy African-American man in a white body is codified under the Rockstar icon and his endless party where anyone around seems to work –the hierarchies among employees almost disappearing. Then, the overall impression is that with a brief flash, a good enough idea, any pinhead dealer without any special training can enjoy an orgiastic life for the rest of his days. In other words, work is not for them, they are lazy bodies who despise effort –in one of their immoral gestures they will repeat that laziness means working for McDonalds. Junkies without will. That will, different from ambition, points to his distance from the busy Gordon Gekko, who does not observe reality as money to waste but as capital. In fact, the abyss between both is expressed in the narrative structure of the film. If Gekko cannot be separated from the stock market world, his own world, the second part of The Wolf of Wall Street leaves this milieu to focus on preventing the gang’s collapse, changing the location of the action.

That way, Belfort will never be accepted by the WASP family, his company will always be second-rate and his Duchess will always come from Brooklyn. After the fall, his speeches won’t be Al Gore’s lectures either. Our protagonist really is a wolf, one who, despite the disguise, will always be an outsider. In this regard, this interested representation of blackness works as a scapegoat to deflect our attention from the post-Fordist structure, placing the problem in a moral dimension in which Protestantism and Puritanism always have the upper hand. In forgetting the existence of this structure, in accepting it, the image of Belfort as a minority hero gains ground, just as the Mafia and so many others had done before.