Written by Sergio Marqueta on 21 December 2014. Posted in CCSBlog. 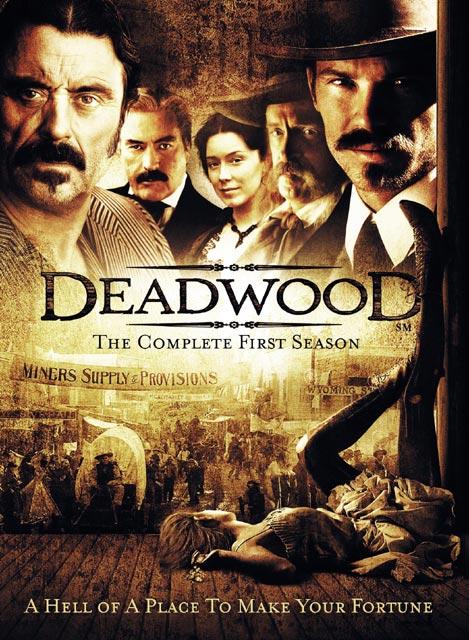 One of the main characteristics of this golden age of TV series is the moral complexity of the characters who are forced to act regardless of their wishes. Only later are they able to fulfill their own ambitions within the flow of events which surround them. Deadwood (2004 – 2006) is no exception.

At first, Deadwood is a mining camp, a critical point between a nomadic and a settled way of life, a one-of-a kind space that subverts the logic of the border so that its inhabitants acquire the status of aliens without being a threat or being used as scapegoats. In it the deserter becomes a national treasure, a low-risk investment. From this perspective, no human nature theory is valid because the lack of laws, not of codes though, is nothing more than a temporary strategy in order to take part in the state and keep progressing inside a capitalism which still contained remnants of utopia. At a time when the daily struggle for life was balanced enough to permit future aspirations.

But make no mistake, the ease to become someone does not imply the absence of power. In fact, if we had to define the series around a basic premise it would be architecture and its play between height and visibility. The plot reveals the presence of two floors with different possibilities to see and be seen, in which the upper one allows an increase of the freedom-control pair. On one hand, this vertical position generates a peculiar ethics that can be occupied by any kind of morality –from diabolic obscenity to aristocratic modesty. On the other hand, in these wild times spatial superiority is more important than money itself –Alma Garret loses authority when she leaves her window to run the ground level bank instead.

Nevertheless, civilization, understood as organic law, opens a hole in this building that positions it as the king of the hill and introduces another type of logic in the camp. To the individual house placed on the heights, a spatial model that still remains in Los Angeles –the boundary of the West–, the skyscraper model, with all its inevitable communication technology, is opposed. Likewise, the definition of skyscraper is relational, that is, it acquires this status in relation to the other buildings which are exceeded by a great distance that has no contact with the ground. Then, there will be a nexus between this new architecture and the way the law will be applied during the consolidation of the United States of America –we should remember that the first American skyscraper was built in 1884 in Chicago, shortly after the events of Deadwood. It is not necessary to point out that they will be the symbol of the 20th century’s big corporations, those which tailor the laws according to their interests and, when these fail, do not hesitate to call for the state of exception, the private militia.

However, while this control crystallizes, a phenomenon appears which in the modern world only works under very specific conditions: the community. Despite the romantic varnish that was given by certain intellectuals of the time, here we can see how this germinates as an imposition that, instead of regulating the domestic world, seeks to protect itself from external menace. Although this community overcomes individualism without falling into absolutism, that is because it was born dead. Its inability to last is the same that compels it to be built, its possibility is its impossibility. The community will not be able to stop the threat even though companies were still in charge of simple mortal men. Leviathan has already been launched in the name of impersonal shareholders who demand that we keep walking forward without any excuse or explanation. Besides, this enemy is also displayed unstoppably from the inside, promising a new order of easy money instead of a world full of pain and suffering –Hearst generously buying all potential business and showing the corpses of the workers who only have their labor; the end of personal stores with no fixed schedules that allowed time to flow differently.

The cancellation of the series is not as tragic or abrupt as it may seem: after the last episode there can be no more Deadwood.