Written by Pablo Gómez Muñoz on 25 January 2015. Posted in CCSBlog. 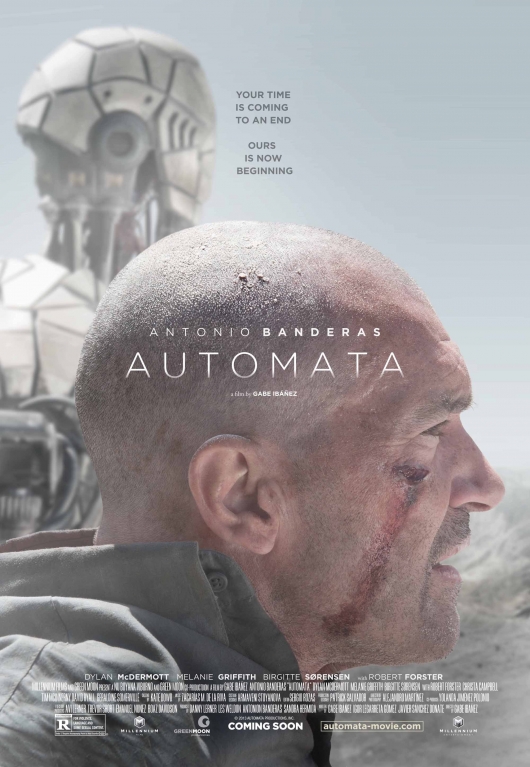 Autómata (Gabe Ibáñez, 2014) is a clear example of transnational filmmaking: a Hispano-Bulgarian production with an American, Bulgarian, and Spanish cast, and shot in English to reach a global audience. The film does not specify where the story takes place and its settings (a dystopian city and a desert) do not offer any clues as to where they may be located. Autómata effectively introduces viewers to its 2044 robotic, sun-scorched world through a series of shots that zoom in or out of black-and-white stills (http://twitchfilm.com/2014/10/twitch-exclusive-opening-clip-from-automata.html). Yet, this low-budget film draws too heavily on the imagery and some ideas from Blade Runner (Scott, 1982). For example, a cop kills a robot who shows signs of having consciousness at the very beginning of the film. Like Ridley Scott's movie, Autómata presents a retro future of outdated technological systems and devices, a dark, polluted city, hot-air balloons, and neon holograms of sexualized female bodies that stand out among the skyscrapers. The first part of the film, even if it lacks the ability to imagine an original urban setting, actually engages viewers, as the reasons behind the robots' behavior remain obscure and several possibilities seem feasible. [SPOILERS] Yet, once the robots take insurance agent Jacq Vaucan (Antonio Banderas) away from the city and its slums, Gabe Ibañez's film gets lost in the middle of the desert. The plot starts going around in circles, very much like the disoriented Jacq in his helpless attempts to part ways with the robots and return to the city. The film ends on a positive note, though, questioning binary distinctions and reassuring viewers that robots do not pose a threat to human beings. Even though Autómata's robots resemble the evil machines in I, Robot (Proyas, 2004) and viewers suspect that they may be up to something, they do not attack or plot against humans at any point in the film. Like the female hybrids, operating systems, and robots in Cloud Atlas (Wachowski siblings and Tykwer, 2012), Her (Jonze, 2014), Lucy (Besson, 2014), and Ex-Machina (Garland, 2015), the 7000-Pilgrim robots in Autómata (particularly the female, who is the only conscious robot who "survives") do not need to rely on humans anymore: they have come of age and want to lead their own "lives." These female pilgrims are symbolically and literally the new frontier explorers (of knowledge) and evoke a no-longer-anthropocentric future.