Bridget Jones: The Edge of Reason by Esther Pérez

Written by Julia Echeverría on 15 February 2006. Posted in CCSBlog. 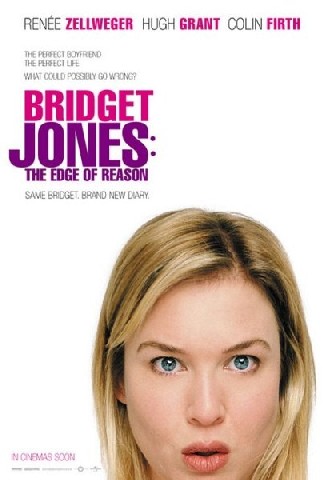 It is often argued that second parts are never good, especially when their predecessors have achieved a certain artistic craft and considerable popularity. For some, that seemed to be the case with Bridget Jones: The Edge of Reason, which followed the release of the incredibly popular Bridget Jones Diary. The second film returns to some of the original and humorous motifs used in Bridget Jones Diary and loved by audiences; for example,  Marks tacky Christmas jumper, the allusions to Bridgets giant panties, or the close-up of her sizeable bum on screen. It is undeniable, however, that, on the whole, in terms of plot, The Edge of Reason relies more on an aesthetics of excess than its forerunner; it feels more over-the-top, artificial and unrealistic. Similarly, the acting  especially that of Renée Zellweger as Bridget  seemed more affected and at times even histrionic, as in the markedly exaggerated and unnatural opening scene which parodies some idyllic and Arcadian-like scenes from The Sound of Music.

In spite of its overdoing and at times blunt and easy irony  or perhaps, partly thanks to them  this second film is still interesting in many respects: like many other movies which draw on conventions from (romantic) comedy, it opens up spaces which allow mockery and criticism of deep-rooted realities and ideas. It is relevant, for example, for its depictions of class and class clashes in Britain. It is also remarkable for the witty and realistic connections that it establishes between class identity and the use of different language registers. Both are at the core of British life and society today and are politically significant.

But here I would like to address a different issue, even if briefly: that of Bridgets physical appearance and her worries about her weight. This round-faced character is rather

chubby and stout  though not over-weight. Significantly, audiences knew in advance  thanks to marketing strategies, we could say  that Renée Zellweger had to put considerable weight on to become a credible Bridget Jones. Her performance clearly stresses that this fictional, thirty-something, single woman has many complexes about being big. Although attractive and with a beautiful face, she does not totally fit current canons of feminine beauty, and this worries her; it even makes her hate her outstanding curves. Thus, after sleeping with Mark (Colin Firth), she covers herself up with a sheet as she gets dressed, for she does not want him to see any of her wobbly bits. This mainly physically-motivated insecurity leads Bridget to be suspicious about Mark, as his secretary Rebecca, with legs up to here, seems to be close to him and does fully conform to current western canons of beauty: she is slim and beautiful and could actually be a catwalk model. Bridgets lack of confidence and need for self-assertion also leads her to remind everybody  often in the wrong context  that her boyfriend is a human rights lawyer.

Bridgets troubles and physical anxieties  and her success among many women spectators  should be understood in context. A large number of influential sources and media (fashion designers, adverts, cinema, TV series, etc.) present an ideal of physical femininity which is difficult to attain. Often it idealises extreme thinness  as embodied by many top models, for example. It is well-known that this enslaving social pressure that identifies beauty and attractiveness with thinness has made many women obsessed

with dieting. In some extreme cases, it has even become the trigger for the appearance of pathologies such as anorexia and bulimia. This hegemonic and rigid politics of thinness is importantly challenged in The Edge of Reason. In fact, this film seems to praise Bridgets voluptuous beauty in different ways. For example, it ridicules her reactions when she exaggeratedly shows herself uncomfortable with/almost ashamed of her body: her overacting awakens a sense of detachment in the audience which gets things into perspective. More importantly, this film presents average Bridget as sexually and physically attractive for men  and women: Rebecca turns out to be a lesbian who is in love with her. In fact, big proves to be beautiful too, and Bridget appears as desired/loved/liked throughout by two very attractive male suitors who try hard to be the chosen one. Eventually, this rather plump heroine gets her happy  albeit still quite open and potentially problematic  ending: she and her Mr. Right (Mark Darcy) get engaged. Yet, they do not marry in this second film, so get ready for Bridgets new adventures in a third release!