Walk the Line by Juan Tarancón

Written by Juan Tarancón on 21 February 2006. Posted in CCSBlog. 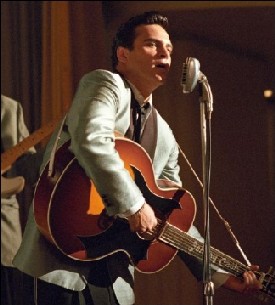 Films have a logic of their own, and nowhere is this more noticeable than in biographical films. This must be both a blessing and a curse, for filmmakers often have to make a well-known and already mythologized life fit into a highly conventional, inflexible and dogmatic narrative pattern. This is the case of this years Good Night, and Good Luck (George Clooney), Capote (Bennet Miller) or Walk the Line (James Mangold). In Walk the Line, James Mangold plunges into the old worn-out formula without the slightest attempt at renovating it. Although the film is based on two voluminous autobiographies, Mangold focuses basically on the relationship between country singers Johnny Cash (Joaquin Phoenix) and June Carter (Reese Whitherspoon) to produce an unexciting romantic story with an equally insipid and formulaic background.  Hollywood may have excelled in manufacturing legends, but biopics often reduce multifaceted public figures to clichéd conventions.

Walk the Line is a syrupy and hollow vision of the growing love between Johnny Cash and June Carter, backed by an incomplete and sanitized version of the convoluted and fascinating fiction we have made out of Johnny Cashs life throughout the years. Youve seen this so many times in so many musical biopics that some scenes are even embarrassing to watch. By the time John meets June he is married to Vivian Liberto (Ginnifer Godwin) and has three children, and June has just divorced the cool country singer Carl Smith. While Vivian criticizes and condemns Johns musical aspirations and would be too happy to give up their opulent life for a more homely and mundane existence next to the man she married, June demonstrates that she can be the wife a successful all-American singer needs: she admires him, puts no limits to Johns legitimate right to success, and is patient, supportive and self-effacing. In the end, Vivian disappears altogether from a film that culminates when June agrees to marry John in front a cheering audience. The film closes in romantic comedy fashion with Junes I-do, but this last scene of the film is a skirmish between Johnny Cashs determination to have June as wife and friend and Junes will not to give in. Yet she concedes defeat, the two embrace, and the film freezes with the image of a new family (John, his guitar, and June) that makes room for Johns music and that belongs forever under the spotlight. The climactic ending seems more the surrender of June than the triumph of love.

The film opens in promising fashion, with a thrilling sequence that takes the spectator into Folsom Prison to the characteristic rhythm of Cashs classic songs accentuated by the clamor, the

shouting and the stomping of the jailbirds as they wait for a encore that turns out to be, to the distress of the guards, the stirring Cocaine Blues. The greater part of the film is a flashback bracketed by this moment but once the true-to-promotional-pictures re-enacting of the legendary 1968 concert is over everything falls on the disappointment side. Johns infatuation and Junes doubts feel too distant and vague. Only on those rare occasions when they are caught minding petty affairs such as shopping or throwing a fishing rod do we feel the presence of some intimacy between them the rest of the script seems to have been written by numbers. The songs (some of which were originally written to articulate their feelings) could have brought some intensity to the story but the film fails in that respect too. The producers were undoubtedly lucky to have Joaquin Phoenix; he resembles the rough and hopeless-looking Johnny Cash (complete with his scarred upper lip) and he mimics Cashs movements and gestures on stage down to the sweat on his face in meticulous biopic style. And Reese Whitherspoon has a Southern drawl to die for. Both do their singing and it feels right to me, but lets get one thing straight: Joaquin Phoenix is not Johnny Cash Cash could recite the shopping list and bring you down on your knees in tears asking for Gods forgiveness.

Biopics set up an interesting game. Both for narrative and for commercial purposes, these films claim to be the rendition of a celebritys real life and refer the spectators constantly to their knowledge of this distinguished life. However, so far as the narrative belongs primarily to its medium, it creates another life story for the protagonist that must be assessed against the spectators knowledge and expectations. Taking this into account, what is it that spectators get and dont get in Walk the Line? Johnny Cash never fit in the Sun mould and after two years he almost simultaneously was invited to join the Opry and signed with Columbia Records, where, in the hands of Don Law and Frank Jones, became the

colossal country star we have come to know. However, in Mangolds film, the country community is nowhere to be found and Cash appears forever associated with the rocknroll gang, a genre that fits more comfortably with the nations romanticized past (if you think westerns are a conversation stopper, you should try country music). While this is little more than an anecdote, there are other aspects of Walk the Lines Johnny Cash that command deeper attention: After Johnny Cash was given his own TV show in 1969 (which ran for 56 episodes), he became one of the most significant figures in the whole United States; his influence and coverage was only surpassed by that of president Nixon. The man that became the quintessence of US-ness was both patriotic and disapproving of Nixons administration, he was a Democrat in a Republican city, endorsed all angles of the 1960s liberation movements, denounced the Vietnam war, condemned the situation of the Native Indians publicly and was censored for it, brought the conditions of prisons to the public eye at a time when it had taken an exceptional political character, made his friendship with ostracized characters publicly known, and surrounded himself with the lower classes, the oppressed and the downtrodden when the class war was coming to a climax. Now, in a country where the Government pushes tax cuts for the superrich, that opposes environmental control if it costs money to big business interests, that has no plans for a free national health care, that has announced a reduction in social programs investment, that plans to privatize Social Security by having retirement funds of citizens depend on the stock market, that endorses the growth of prisons instead of the reform of the prisoners, that aims to control all flow of information, that gave itself the power to detain people simply on suspicion, that promotes a large military establishment, that has to confront the disastrous results of the invasion of Iraq and an escalating national debt, in this country, the omission of Johnny Cashs life-long rebellious spirit must be appropriately weighed up. Even the portrait of June is unfair. Whereas they lived one of those great timeless romances (or so the story goes) with John yielding to death once June died, she is sacrificed here to a trifling film logic.

Mangolds film has the well-groomed feel of a TV movie and lacks not only the grime and filth of the country-singing honky-tonking South in the 1950s and 1960s but also any attempt to revitalize the biopic genre, and this becomes painfully noticeable when compared with the innovative drive of much of the music business today (and I mean in musical but also in cinematographic terms) or with Johnny Cashs urge to always reinvent himself until the day he died listen to the last recordings he made with Rick Rubin or watch the promotional video for the song Hurt and everything in this film will appear ridiculous, insignificant and self-indulgent.