Ang Lee and many critics have said that Brokeback Mountain is no western but a love story, but it seems to me that trying to decide whether it is one or the other is not very useful to understand the movie. Their emphasis on the love story component is clearly an attempt to claim the same sense of normalcy for homosexual love that heterosexual relations have in our

culture, and that is fine, but it is not necessary to deny the generic nature of the film in order to support that claim: in fact, Brokeback Mountain is the more poignant because the love story develops in the world of the western, traditionally defined by the excesses of heterosexual masculinity. The film is a love story, a romantic melodrama, and a western at the same time, something that lies implicit in some critics' comments about the Wyoming landscape having been queered by the film. This relevance granted to the landscape actually points to the film's participation of the conventions of the western, namely the use of outdoors spaces with a metaphorical intent. Another ingredient is to be found in Jack's (Jake Gyllenhall) and Ennis's (Heath Ledger) work, their tending sheep and the lonely way of life they lead in a deserted land where they are the only vestige of civilisation. It is this mix of the stern yet beautiful Wyoming mountains and the jobs we see the main characters perform that actually functions as backdrop to the love story, and it is in the alteration of these conventions of the western that I found one of the sources of pleasure in the film: while most westerns use outdoors space as the site of confrontation and action, the first section of Brokeback Mountain revels in the slow passing of time and the recurrence of a space in which nothing in particular happens, evoking the flavour of everyday life; another way of saying this would be that the film bogs down and risks boring the audience, as some critics remarked, but that was not my experience. Similarly, work in the western has very often merely functioned as an excuse to set the characters in a context of danger and conflict with the wilderness, but here its recurrence throughout the film makes it meaningful to the construction of the characters, mainly of the taciturn Ennis del Mar, a 21st century Billy Budd whose difficult personality, the film implies, has been modelled by his constant struggle for survival.

Melodrama was particularly relevant to me in one of the final scenes, Ennis's visit to Jack's parents. It was there that the sense of loss and emptiness was mostly felt, and beautifully recreated by the performance of the actors who play his parents (Peter McRobbie and Roberta Maxwell) and by the almost empty rooms of the house. One could feel the hardship of Jack's life in that home, the silence and recrimination his childhood days in the middle of nature 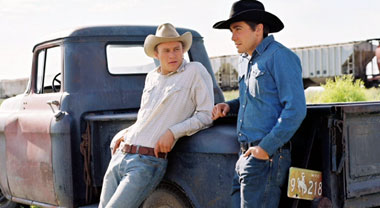 probably meant to him. Although the film does not make it clear, I had the impression that the attitude of Jack's father reflected his condemnation of Jack's homosexual life, although it doesn't really matter if he actually knew about it or not, because Jack's life had already been marked by his father's, perhaps unconscious, hostility towards him. In this context, it is interesting that Jack dreamed of returning to his parents' ranch and living there with Ennis. It is as if he could not get rid of the need to save that part of his past, spoiled by his parents' very strict religious creed, and he needed to do so in the same place where he had spent his childhood. At that point we realise Jack's escape to Texas and marriage was a double fantasy that tried to avoid the traumas caused by his real feelings: his love for Ennis and his nostalgia for a lost, actually never had, family life at home. The fact that he chose his bedroom to hide the two bloodstained shirts links the two and creates the film's most touching moment.