East Is East, Bend It Like Beckham, Ae Fond Kiss , by Alejandra Rodríguez

Written by Alejandra Rodríguez on 02 June 2007. Posted in CCSBlog.

Cinema is one of the most influential artistic expressions of the 20th century, commonly known as the seventh for its ability to narrate historical events and  invent fictional stories on its search for entertainment. Among the countless film genres, one of the most open to discussion is the social film. This type of production tries to reveal the cultural diversity and mixture in which the capital cities of the developing countries are, nowadays more than ever, immersed and how that cultural clash has a great

influence not only on people but also on traditions. To some extent, one of their most recurrent themes is the predicament of immigrant families whose children grow up in a new society to reject the customs and limitations of the earlier generation. This is, basically, what links the biracial Khan family of East Is East, the British-born daughter of Sikh parents Jess in Bend It Like Beckham, and Ae Fond Kiss, a Glaswegian version of Romeo and Juliet.

Set during the 1970s, East Is East deals with the marriage between George (Om Puri), a Pakistani immigrant, and Ella (Linda Bassett), a native Anglo, and how their seven children are in-between the rigid Islamic dictates of their father and the disparity of a working class neighbourhood in Salford, Manchester. Sometimes received with open arms but constantly rejected by the racist, and Enoch Powell admirer, Mr. Moorhouse (John Bardon), the real problem of the Khan children is, paradoxically, how to fit in their own family and not in their society: they struggle every day between Islam lessons and pork chops, between arranged marriages and nights at the local disco. Their detour from the religious parade of the opening sequence very much illustrates the multiple paths they take while trying to avoid their father's authority and looking for integration. Still, there is a strong bond between the siblings when they oppose their father's control and this is never more obvious than when Tariq (Jimmy Mistry) runs away from home and is joined at the bus stop by his girlfriend, her friend and two of his siblings, making it clear that he may escape from his father's "tyranny" but not from his friends and family.

In Chadha's Bend It Like Beckham the source of rebellion is of a very different kind: Jess Bhamra (Parminder Nagra) wants to play football, but being a girl she is only able to do so in the local park with some friends, and being an Asian girl her chances are even more limited because her family do not allow her to 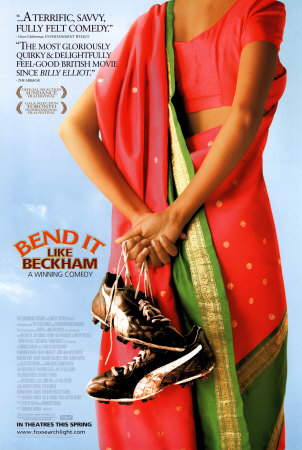 continue playing now she has grown up. "What family would want a daughter-in-law who can run around kicking football all day but can't make round chapattis?", fires Jess's mother just when she has been offered the opportunity to play in a semi-professional girls team. One of her team-mates, Jules (Keira Knightley), thinks she is brilliant playing football and a friendship quickly develops between the two girls, the film's point of departure to explore their respective backgrounds. Although at first sight the film seems to be more interested in highlighting the girls' differences, it is rather obvious that their lives have several points in common: they both feel that football will play an active part in their future, a fact that is not always understood at their homes, and still better is the parallelism between their mothers obsession with ladylike daughters. Through these comparisons, we gradually move to the climax at the very end of the film, with a curious crosscutting sequence between a football match and Jesss sisters traditional Sikh wedding, reinforcing the overall message of the film that in contemporary societies culture clashes are inevitable but necessary.

Ae Fond Kiss deals with a very well-known story: boy meets girl, falls for her but they have to face adversity, a classic theme that becomes something more when Ken Loach, considered "the king of social realism", is behind the camera. Responsible, among many others, for Bread and Roses (2000), based on real

events, and the recent The Wind That Shakes the Bartley (2006), his personal style strikes the depths of our hearts, crossing over social and racial borders. In the case of Ae Fond Kiss, clashes are almost everywhere: between male and female, younger and older generations, personal desire and family duty, between Casim's (Atta Yaqub) reserved but enterprising attitude towards life and Roisin's (Eva Birthistle) more open and sometimes careless point of view and, above all, between Muslim and Catholic traditions. The very first sequence of the film illustrates a mixed reality through the protagonists' respective cultural and religious backgrounds, which, at first sight, seem to be different and even opposed. By the time they have become a couple, we have also become aware that their relationship implies family pressure for Casim, when he refuses to marry his cousin in an arranged wedding, and religious intolerance for Roisin, because as a teacher in a Catholic school she is subject to her priest's sanction. So, we can conclude that prejudice and fundamentalism exist at the core of both communities.

Basically, what lies at the core of these films is mixture and multiculturalism, the diversity inherent to hybrid communities, where everybody looks for their own place. Indeed, all three films share a similar teenage girl character: East Is Easts Meenah Khan (Archie Panjabi), Bend It Like Beckhams Jess Bramhra, and  Ae Fond Kiss's Tahara Khan (Shabana Bakhsh). The first two rebel against their parents' authority, preferring football to wearing saris, while Tahara Khan very well understands and illustrates her situation in a wise speech at the beginning of the film, where she defends that all Muslims are not terrorists or fundamentalists, and that she is a hybrid and is proud of it.

O'Donnell's film deals with the complexities and contradictions of everyday life, the gap between the older and the younger generation, in this case translated into a biracial context, but it is neither a comedy nor a tragedy; perhaps its weakest point is Om Puri's serious performance (with all that fun around him) but we should take into account that his character very well expresses the father's concern about his children: he knows his adoptive country offers many opportunities but does not want his descendants to make the same mistakes he made. He is a true Pakistani who, despite all the years hes lived in Britain, still keeps complaining about cultural difference. Chadha's Bend It Like Beckham, on the other hand, features a similar theme but leaves it underdeveloped, focusing on the football issue instead, combining it, from time to time, with the other subplots: Jess's falling in love with her coach Joe (an interesting Jonathan Rhys Meyers), her best friend's secret homosexuality, etc. Loach's Ae Fond Kiss prefers to display present-day indecision about relationships and takes it to its extreme by forcing the protagonist couple against the protection of a traditional arranged marriage. All in all, these films try to point out the impossibility of bringing up children in a multicultural community if they are only offered one side of the coin.